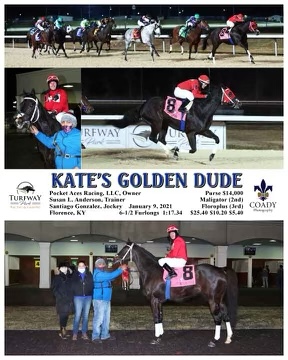 Kate’s Golden Dude was the winner of the third race at Turfway Park by about a length and a half earlier this evening. He broke well and ran in fifth position out in the 3-path going down the back stretch. He was a bit headstrong through the first quarter and started gaining ground going into the turn. He made a huge move mid-way through the turn and hit the top of the lane with about a two-length lead. The race was never really in question from that point, although Maligator did gain some ground in the final strides.

Susan told Santiago before the race to try to get Kate’s Golden Dude to relax, but not to fight him if he didn’t want to settle. You can see in the replay that he was throwing his head around on the back stretch, so Santiago just gave him his head and let him go. It was a little earlier move than we expected but had plenty enough late to hold on.