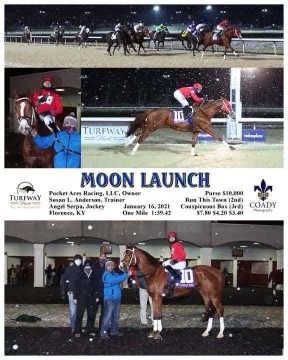 Moon Launch was the winner of the fifth race earlier tonight at Turfway Park. He broke well and was content to go into the first turn wide and several lengths off the lead. He had open space running in seventh position about five lengths back going down the back stretch. He made his way over to the rail and started to pick up the pace a bit going into the turn. Serpa kicked him out wide coming out of the turn and he made his way over to the middle of the track. He made up a ton of ground to take over the lead late and pulled away to win by nearly two lengths.

We had hoped Moon Launch would get out of the gate and get going a little faster and be able to get over to the rail going into the first turn. When that didn’t work out, Serpa just tried to get him into a good spot. Angel said he ran pretty well the few times he was in traffic, which is a big plus for him. He ran really strong to close out the race.