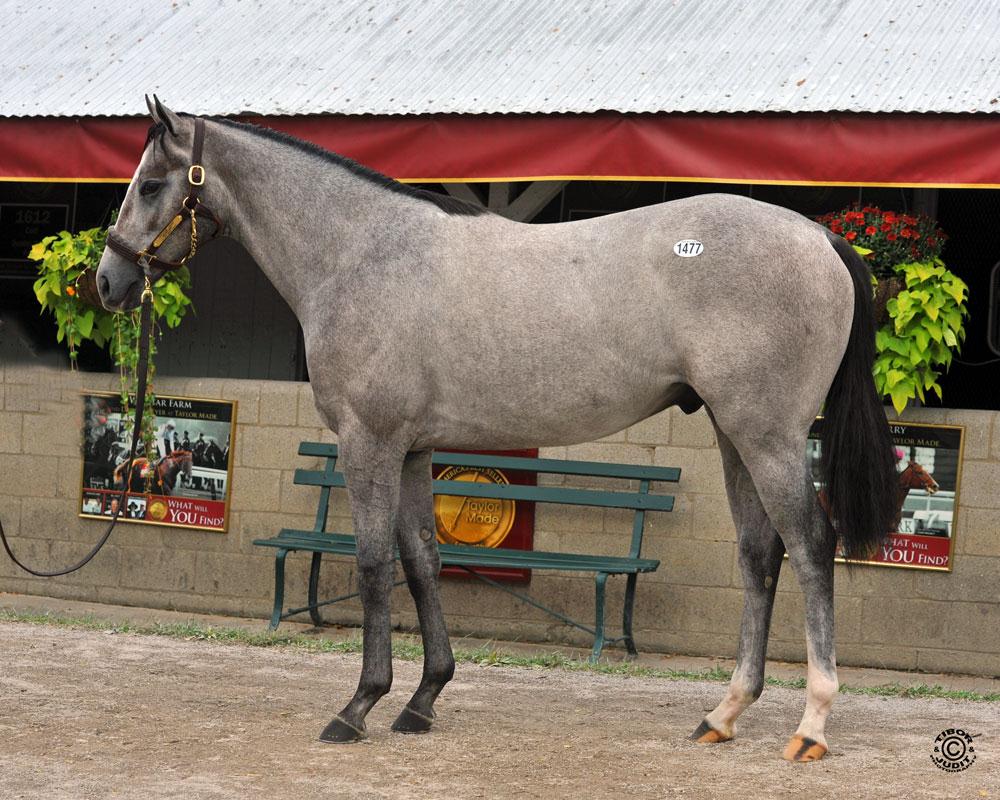 Pocket Aces Racing, LLC is extremely proud to announce that we have recently acquired a very exciting racing prospect for our syndicate. He is a yearling colt by the world-class sire Awesome Again (stands for $75,000 in 2013) and the first foal out of a 7-year-old stakes winning Tapit mare named Redreamit.

This handsome, steely-gray colt was foaled on February 9, 2012 and has matured since then into a racey individual with plenty of scope and just the right amount of muscle tone in his shoulder, forearm and gaskins for a route of ground race horse. He has above average size, not too big but not too small, and his conformation through the knees and ankles is completely correct. In addition, he possesses a powerful and very athletic walk. When he moves his rear limbs swing forward very loosely, from the hip, with exceptionally long strides. During the sale we saw him on several occasions in the crowded and very hectic barn area, as well as the sales pavilion show rings (which can be an overwhelming situation for young horses) and he didn’t turn a hair at any time. This gives us reason to be very optimistic about his ability to adapt to the mental aspects of being a good race horse.

As well as being such an excellent physical specimen we are also “over the moon” about getting a colt that is so well bred. His father was not only one of the greatest race horses of his generation but he is also one of the most successful stallions currently standing in North America. For his race career he won 9 races, 7 of them stakes, from 12 starts en route to earning over $4,300,000. Key victories include the 1998 edition of the Breeders’ Cup Classic-G 1 (defeating the likes of Silver Charm, Skip Away and Arch), along with the Whitney H.-G1 and Stephen Foster H.-G 2. As great as Awesome Again was on the track his most important impact on the breed has undoubtedly come from the breeding shed. From 12 crops to race his progeny have earned in excess of $66,000,000. He has sired the likes of champions Ginger Punch and Ghostzapper as well as other Grade 1 winners Toccet, Round Pound, Awesome Gem, Wilko, Paynter, Spun Sugar, Sugar Shake, Daaher and Dubai Escapade. Not to mention the best dirt horse currently in training, Game on Dude.

Not only does this colt come from a very strong male family, his female family is well represented also. His mother is a young mare by Tapit that won her 1st start as a 2-year-old, going 6.5 furlongs on the dirt, at Churchill Downs earning an 88 Beyer figure. Her career peaked in September of her 3-year-old campaign when she won the Twin Lights S. at Monmouth, going a mile and an eighth on the turf, which earned her another 88 Beyer figure. We should also mention that her sire, and this colt’s broodmare sire, Tapit (stands for $125,000 in 2013), ranks as one of the top 2 or 3 young stallions in all of North America based on sales and progeny race results.

We believe this young Awesome Again colt is the “total racing prospect package”. Physically, he is correct and extremely athletic with tons of quality. Both his male and female family is represented by the highest racing quality and clinically he has passed a pre sale veterinary radiograph and throat inspection with flying colors. Achieving success at the higher levels in racing can always be a risky venture; however, based on all the information we have gathered on this colt we feel he represents the best chance of realizing such lofty goals in horse racing. Pocket Aces Racing is very enthusiastic about this colt’s future and if you would like to join us for the possible thrill of a lifetime please feel free to contact us at your convenience for more information on how to become a part of this horse’s career.