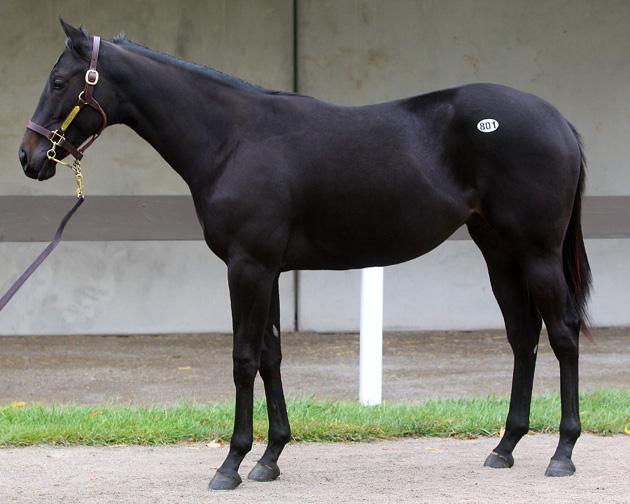 Pocket Aces Racing, LLC is very pleased to introduce the newest member of our stable – A yearling filly by the highly regarded and ultra-consistent stallion, Northern Afleet, out of the stakes-placed, and stakes winner producing mare, Hope for Love.
We have been eagerly searching for an Ohio bred racing prospect that meets our highly selective physical criteria since the Keeneland September sale. After inspecting over 50 Ohio bred colts and fillies at the Keeneland and Fasig-Tipton sales, we settled on this filly as the best of the bunch. She is a tall, leggy dark bay filly that stands over a ton of ground and possesses plenty of bone in her limbs and a great deal of strength in her forelegs, hips and gaskins. She looks great stood-up but she actually looks her best when on the move. When she walks, she has a very fluid action with long striding hind limbs. She is also correct through her knees and ankles which should help to make her a very sound filly.
Since his first crop of foals hit the race track in 2002, her sire, Northern Afleet, has been one the most consistent sources of top-class and mid-level (stakes, allowance) race horses in North America. From 12 crops of racing age his progeny have earned nearly $47,000,000, which averages out to $3,900,000 per year and $59,720 in average lifetime earnings for every one of his horses that have made it to the starting gate. Some of Northern Afleet’s top runners include 3-year-old champion Afleet Alex (Preakness-G 1 and Belmont S.-G1, etc.), champion sprinter Amazombie (Breeders’ Cup Sprint-G 1), Negligee (Darley Alcibiades S,-G 1) and Evening Jewel (Ashland S.-G 1).
Her dam is a stakes-placed Fortunate Prospect mare, named Hope for Love, whose career earnings top the $100,000 mark. As successful as her racing career was, we believe it is safe to say her career as a producing mare has been even better. All four of her foals of racing age have made it to the race track and all four are winners. Her produce list is topped by the multiple stakes winning Candy Bites, the half-brother to our filly. His career earnings currently stand at $102,429. We say currently because Candy Bites is still racing, and as recently as October 12th he was 3rd in the Best of Ohio Sprint Stakes, so he could potentially earn even more money.
We are extremely happy to have acquired a registered Ohio bred filly. The Ohio bred program has been successful for a number of years, however, we believe it is poised to be the region’s most lucrative state bred program considering the new and improved River Downs (over $125,000,000 has been invested to upgrade the facility and add a casino) opens next spring. As an Ohio bred, our new filly is eligible to run in numerous $50,000, $75,000 and $100,000 stakes races that are restricted to Ohio breds. Other benefits of the program include maiden and allowance level races restricted to Ohio breds as well as added purse money for Ohio breds in non-restricted races. It is also important to note that while the purse structure for the revamped River Downs has not been announced, most in the industry expect a substantial increase from previous years.
We believe this filly has the combination of athleticism and family connections, from the top and bottom of her pedigree, to make her a very promising race prospect. That coupled with the fact that she is eligible for a well-funded state bred program restricted to a relatively small number of horses, will make her very popular with those in the thoroughbred racing share market. We feel she represents tremendous value and don’t expect shares to be available for very long. For more information, please feel free to email us at [email protected] or call Jared at 606-922-9325 or Marc at 859-312-6272.