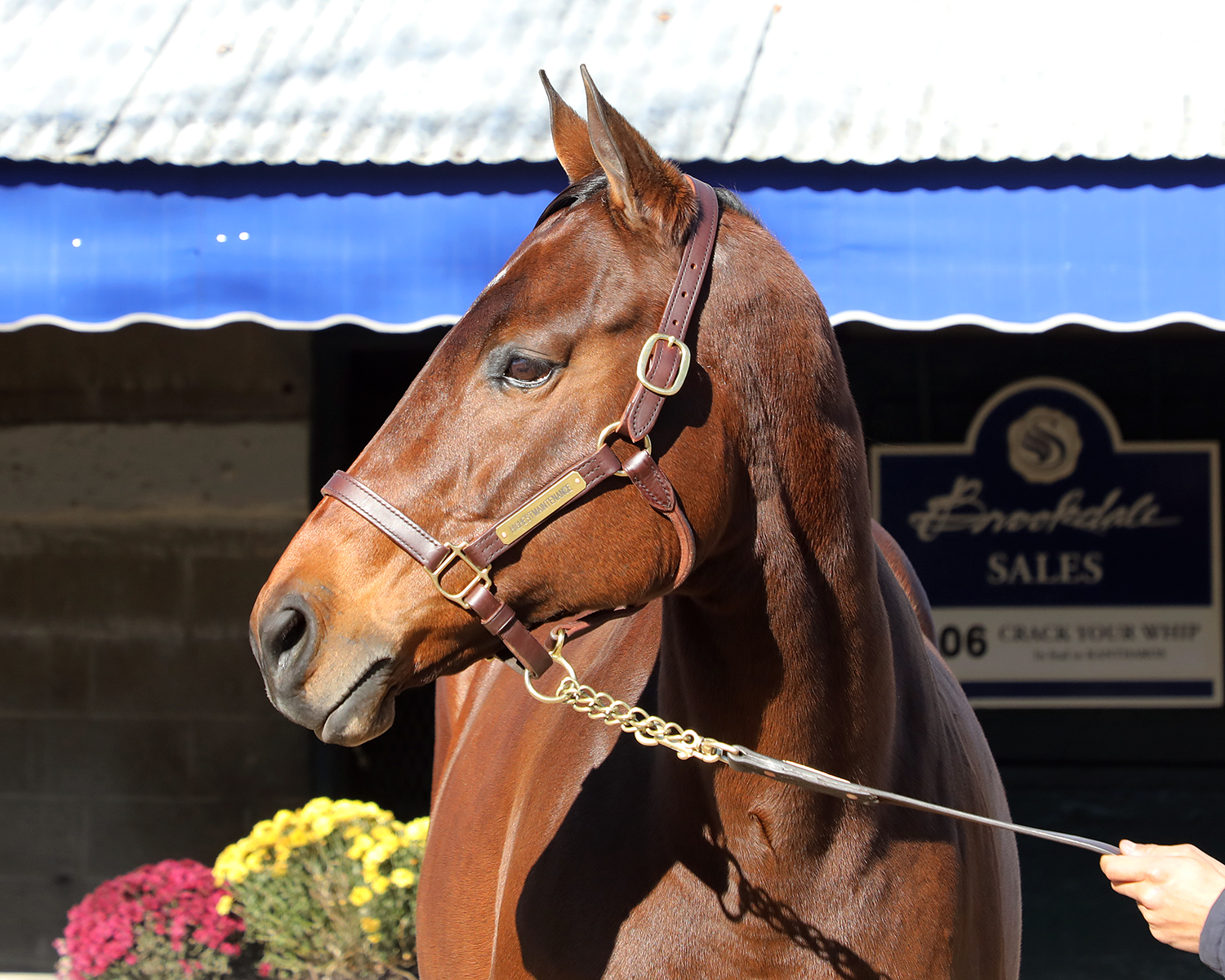 Pocket Aces Racing is very excited to announce the creation of our first breeding and pinhooking partnership. We launched the venture with the goal of purchasing three horses, ideally one mare and two weanlings or short yearlings, at the 2018/2019 breeding stock sales with the goal of selling them later in 2019 or early 2020. We hope to capitalize on the thoroughbred market’s appetite for foals by young stallions out of young mares. We have looked for mares with one or two foals of racing age that could potentially enhance her value, as well as the value of the ensuing foal, over the course of the spring or summer. Likewise, we have focused on weanlings by similarly young sires out of young mares.

Our first purchase for the new Pocket Aces breeding/pinhooking syndicate is an 9-year-old Macho Uno mare named Highestmaintenance. Standing at a little over 16.0 hands she is a big tank of a dark bay mare with black legs. As a yearling at the 2011 Keeneland September sale she sold for $60,000. Then she was resold at the 2012 OBS March 2-year-old in-training sale for $240,000 to the powerful Repole Stables after she blistered an 1/8 mile in 10.0 seconds. A time which equaled the co-fastest 1/8 mile work for the sale. During her racing career Highestmaintenance was trained by Todd Pletcher to 3 wins from 11 career starts while earning over $100,000 in the process. On her best day Highestmaintenance was 2nd (beaten a half-length) in the Cicada S. at Aqueduct earning an impressive 89 Beyer for the effort. One of our goals for this sale was to buy a mare who had 2-3 foals as the mares in foal for the first or second time tend to be too expensive. Highestmaintenance certainly fits this criteria as she was retired in 2014, bred for the first time in 2015, and delivered her first foal, a filly by Overanalyze, in 2016. In 2017 she had a colt by Micromanage and in 2018 she had a colt by Outwork. The potential downside to purchasing a mare that has already had several foals is they might have had a foal that didn’t sell or run well in their produce record. However, we do not have to worry about this with Highestmaintenance. None of her 3 foals has ever been offered for sale (Repole Stable intends to keep all 3 to race) nor have they run yet which makes her produce history a complete blank slate. Marc has been told by the owner of the farm that boards the 2018 Outwork colt that he is a “crackerjack” foal. Marc has also been told by Mike Repole’s racing manager that the 2-year-old out of Highestmaintenance is the best of her foals and that she is in training in Ocala, FL and will be moving to Todd Pletcher’s barn in the near future. We are excited about the prospect of this two-year old significantly enhancing the value of both the mare and her foal.

Highestmaintenance is in foal to the popular young sire Outwork. Outwork is a Grade 1 winning son of top stallion Uncle Mo that stands at WinStar Farm for $15,000. His first crop of foals are weanlings of 2018. That means buyers have had their first opportunity to purchase Outwork’s progeny at this year’s fall breeding stock sales. They have proved to be very popular with buyers. So far 25 weanlings by Outwork have been offered at public auction with 20 of them selling for an 80% sales rate. The 20 that have sold have averaged $52,400 in the ring with top individuals selling for $140,000, $130,000 and $125,000. We definitely anticipate Outwork’s progeny remaining popular with buyers through next year.

Competition to breed to young, exciting and commercially viable stallions is fierce so our first job with Highestmaintenance was to book her to a stallion for 2019. After a great deal of research we determined that the best match for her was going to be the young stallion Speightster. Speightster stands at WinStar Farm in Versailles, KY for $10,000 and he is a son of leading sire Speigtstown (2019 stud fee $80,000). Speightster first crop of foals are weanlings of 2018 and they too have been very popular with buyers. So far in 2018 36 of his weanlings have been offered for sale at public auction and 29 have sold for a sales rate of 81%. Of the 29 that have sold this year they have averaged $60,517 with a median price of $57,000. Top individuals have sold for as much as $135,000, $125,000 and $110,000.

In our opinion we couldn’t have possibly gotten this project off to a better start than with the purchase of Highestmaintenance. Her $30,000 price tag has to represent considerable value as she is stakes-placed and only 8 years old. When you consider the fact that her previous owner purchased her for $240,000 just 6 years ago the value seems tremendous indeed. She is also a big, powerfully built mare with great conformation. Our breeding philosophy is simple “black kittens come from black cats” so it stands to reason that she will produce big, powerfully built and well conformed foals with commercial appeal. Lastly, with her purchase we have maximized our opportunity for a significant pedigree update as her 2-year-old will get every chance to succeed on the race track. For these reasons we feel like we have gotten everything we were looking for in a mare and off to the best start possible.

We followed up with the purchase of our first weanling, a filly by Not This Time, and couldn’t be more excited. The filly was foaled on February 27, 2018. Physically, she has enough size, scope and strength and walks well through her front and back limbs. She is an attractive foal now, however, we think she is going to be an even better yearling next summer. The frame, along with her shoulder and hip angles, are all there and we anticipate that with some time and TLC she will continue to fill out more becoming an impressive yearling. We are particularly excited about getting a Not This Time weanling. As a 2-year-old Not This Time broke his maiden by 10 lengths and then won the Iroquois S.-G 3 at Churchill Downs by 8 lengths. His 3rd start was in the 2016 Breeders’ Cup Juvenile S.-G1 where he finished 2nd, beaten a neck, to 2016 eventual champion 2-year-old Classic Empire. In that race he sustained a career ended tendon injury and never raced again. The sky was the limit for Not This Time and it’s amazing to think that he almost won the Breeders’ Cup Juvenile S.-G 1 on a bad tendon! Because he was so fast and such a determined racehorse we felt confident that his progeny would be well received and they have been. His first crop of weanlings have been made available at this year’s breeding stock sales and 17 have sold from 22 offered for a 77% sales rate. Of the 17 that have sold they have averaged $80,882 in the ring with a median sales price of $85,000. Top individuals have sold for $160,000, $140,000 and $125,000. We see no reason why Not This Time’s progeny won’t remain popular with buyers through 2019.

We added Wicked Pretty, a yearling filly by Violence out of the stakes producing Wekiva Springs mare, Pretty Springs at the January Horses of All Ages Sale at Keeneland.  We purchased the filly in partnership with Glencrest Farm.  She was one of 11 yearlings we had short listed from the first book of the sale and was by far the nicest filly we had seen.  She is a striking chestnut with flashes of “chrome” on all four legs and a big blaze on her face.  She tracked well through her hind and front limbs.  She has good size, but still has plenty of growing to do.  She has plenty of scope with strength in her forearms, gaskins and hips that future buyers (especially 2-year old pinhookers) seek out so aggressively in the fall.  She x-rays clean and has an A+ throat. We feel she is the type of filly that has tremendous potential at the yearling sales.  Yearling Violence fillies averaged $127,000 in 2018 while individuals brought $450,000, $210,000, $200,000, $190,000 and so on.

Pricing for the package is below and includes the mare and both fillies.  We also hope to add one more yearling or mare at the February Fasig-Tipton Sale.

Interest has been very high and we only have a few shares still available. Please CONTACT US with questions or to reserve your share today!