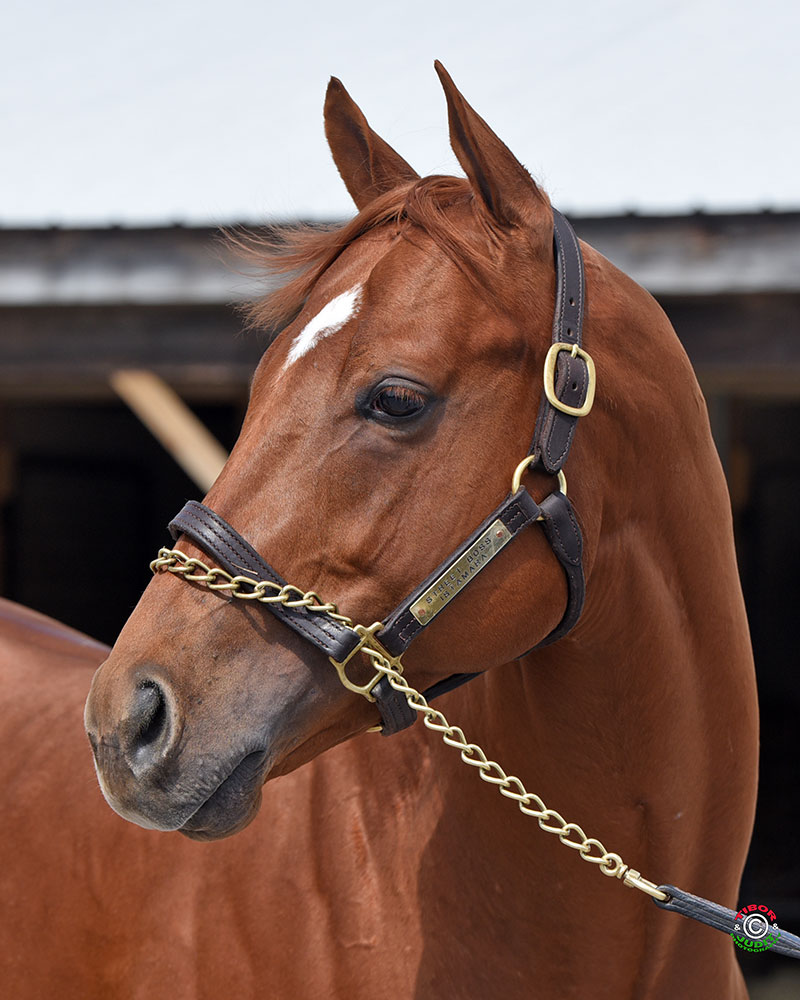 Pocket Aces Racing LLC is very excited to announce the addition of a 2YO colt by Street Boss to our stable line up. The colt is out of Istamara (GB), by Teofilo. He was a $120,000 purchase out of the Fasig-Tipton Midlantic Sale earlier this week.

He first came to our attention through data collected from the breeze show by our sales partner Data Track International. Data Track records high speed video of each horse’s breeze during the three day under tack show. They are able to measure the stride length of every horse using the high-speed video and those measurements, along with various other proprietary parameters, are used to quantify each horse’s breeze. The quality of these are represented by the company’s trademarked Breeze Figure. Interestingly, the Daily Racing Form has also purchased this information from Data Track for more than 10 years to make available to their customers as an aid in handicapping the always tricky 2-year-old races. When we receive the information from Data Track each work is grouped 1 through 5. According to Data Track, their research indicates we can eliminate the 3 through 5 works and focus on inspecting the group 1 and 2 horses. It is important to note that while the information from Data Track is extremely helpful in allowing us to work more efficiently, each horse we purchase from a 2-year-old in-training sale must still meet all the Pocket Aces Racing criteria as well. The best way to describe our relationship is that Pocket Aces Racing is ultimately responsible for selecting the best horse we can afford to purchase while Data Track’s role is to identify a smaller group (relative to the total number of horses in the sale) of the most talented horses for us to inspect.

When we received the initial reports from Data Track, hip 214 was reported as a group 1 horse with a stride length of 24.63 feet and a Breeze Figure of 74.55. While his stride length was impressive in its own right, his Breeze Figure of 74.55 was the 5th highest number of all the horses Data Track analyzed for us. Knowing the colt put in one of the top works, by the numbers, Marc sat down to review his breeze video. His first impression was that the colt was extremely fast but since he went in 10.2, just a tick off the bullet work for the day, that was fairly obvious. There are two basic ways to go fast though. The first is with a high stride frequency. In this way horses rapidly turn their legs over with a short, scratchy action. It can be employed successfully but it’s usually more effective over short distances (4.5 to 6 furlongs) and is not particularly efficient at longer distances. The other basic mode by which speed is achieved is covering a large amount of ground with each stride and this seemed more like hip 214’s style. In the breeze, he travelled lower to the ground, extending his lead leg out as far as possible while driving powerfully with his hind end. His measured stride length would support the visual impression as well. His stride was measured at 24.63 feet which placed him the top 20% of the sale. By comparison, horses in the bottom 20% were covering anywhere from 22.13 feet to 23.43 feet. Another major impression Marc had from the work video concerned the rider’s poor performance. The colt was trying hard and showing good form when he was allowed to; however, the rider was more of a hindrance than a help. These horses are very young and green at this stage in their lives and they just don’t know how to respond when a rider is on their back acting like he’s within 50 yards of the wire in the Kentucky Derby and he just needs to make up a length to win! It was a short trip to be sure, but the rider spent the entire 1/8 hitting him in the shoulder, scrubbing on his neck and riding too high. In our opinion, there is no telling how fast the colt would have gone had the rider tapped him a few times on the shoulder at the pole, crouched down low, sat still and pointed him in a straight line. The colt would have easily done the rest. Ultimately, it probably worked out for the best though. Had he gone in 10.1 the colt surely would have sold north of $150,000 or $200,000 plus with a 10.0, and we would not own him.

After the review and analysis of his breeze video Marc was able to physically inspect the colt when he arrived in Baltimore. Upon inspection we found the colt had good size and appears to have a couple of inches of growing still to do. We anticipate he’ll finish up around 16.0 hands. He is a scopey colt that stands over plenty of ground without being too long over his back. This colt has an extremely powerful build with great muscle mass in his shoulders, forearms, hips and gaskins. Given his powerful build it is well proportioned in that he is strong everywhere (horses with great mass in the front but light behind tend to be weighed down by their mass; while horses with great mass behind and light upfront tend to suffer from soundness issues) and he is as athletic a young horse as we have seen in awhile for being so strong bodied. You can see this athleticism in his walk as he is light on his feet and strides out well with his hind limbs. Of the 124 horses we inspected at the sale we shortlisted 16, however, of the 16 we shortlisted only two horses received a grade of B+ (Marc has only given a handful of A grades in his career) and hip 214 was one of them.

Having passed through all of our pre-purchase criteria we decided to have hip 214 vetted. The radiographic findings showed the colt had no abnormal finding in any of his joints. The colt also received an “A” grade from Dr. Worden on his endoscopic, or throat, examination. If anyone has any further questions regarding these exams, please feel free to call or email Marc or Jared.

With of all our pre-purchase criteria met, we then decided to bid on the colt. Pocket Aces Racing was the successful bidder and we were thrilled to get him for $120,000. Despite the six-figure price, we feel like he is quite the bargain.

While he may not be the most well-known sire, Street Boss has had a very nice career since entering stud in 2010. From eight crops of racing age, he has produced 32 stakes winners including horse of the year, Street Rapper, Cathryn Sopia, Capo Bastone, The Quarterback, Danza, Decked Out, Hence, Holy Boss and more. Since 2013, he has produced more G1 winning 3YOs on dirt than any sire except Tapit and Curlin. Street Boss is by the great Street Cry, sire of Kentucky Derby winner Street Sense, Breeder’s Cup winner Zenyatta and Australian phenom, Winx.

Istamara (GB) is an unraced daughter of Teofilo, a son of Galileo. This colt is the third foal out of Istamara. The three-year old is a full brother our colt. His debut at the Fair Grounds in January was an impressive one as he ran second and scored a 97 EQB speed figure.
A full share in the colt represents 10% ownership and costs $15,750. Half shares are $8,000. Quarter shares are $4,250. An eighth of a share is just $2,300. All expenses are covered through September 2019. Expenses are then billed quarterly at $1,300 per FULL share.