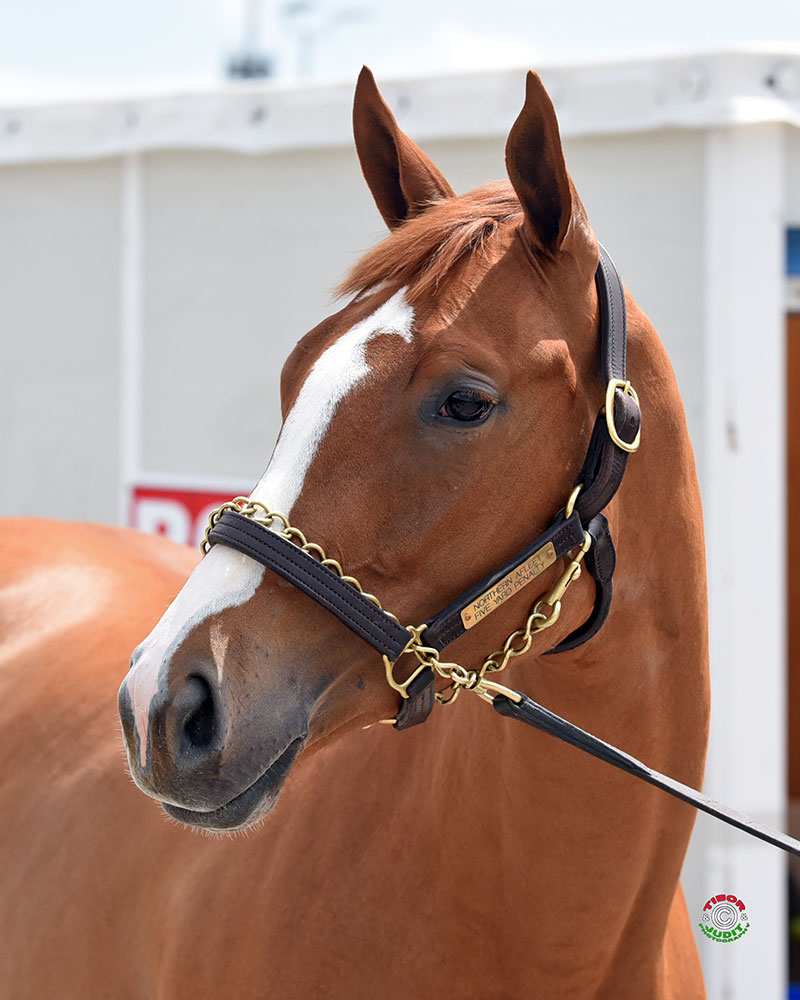 Pocket Aces Racing LLC is extremely excited to announce the addition of a 2YO filly by Northern Afleet out of Five Yard Penalty, by Consolidator. The filly was purchased at the Fasig-Tipton Midlantic Sale earlier this week.

She first came to our attention through data collected from the breeze show by our sales partner Data Track International. Data Track records high speed video of each horse’s breeze during the three day under tack show. They measure the stride length of every horse using the high-speed video and those measurements, along with various other proprietary parameters, are used to quantify each horse’s breeze. The quality of which is represented by the company’s trademarked Breeze Figure. Interestingly, the Daily Racing Form has also purchased this information from Data Track for more than 10 years to make available to their customers as an aid in handicapping the always tricky 2-year-old races. When we receive the information from Data Track each work is grouped 1 through 5. According to Data Track, their research indicates we can eliminate the 3 through 5 works and focus on inspecting the group 1 and 2 horses. It is important to note that while the information from Data Track is extremely helpful in allowing us to work more efficiently, each horse we purchase from a 2-year-old in-training sale must still meet all the Pocket Aces Racing criteria as well. The best way to describe our relationship is that Pocket Aces Racing is ultimately responsible for selecting the best horse we can afford to purchase while Data Track’s role is to identify a smaller group (relative to the total number of horses in the sale) of the most talented horses for us to inspect.

When we received the initial reports from Data Track hip 149 was a high-level group 2 work with a stride length of 23.38 feet and a Breeze Figure of 69.14. Once she had been identified as one of the more talented workers Marc reviewed the video of her breeze and was impressed with what he saw. The first thing he noticed in her work was that she travelled well with good action in her limbs. In addition, she was very focused which can be a difficult thing for young horses in a sales situation. Her head was low, and she was in the bit for the move. Moreover, the rider gave her minimal encouragement which is a good sign she was willing and did not have to be forced to run. As is so often the case at these breeze shows, many of the young horses are looking to quit after the wire. However, the filly galloped out in much the same manner as she breezed…low, in the bit and aggressive. She stopped the clock in 10.3, which is considered an average time, however, the time does not concern us. We anticipate her being a two-turn filly which means 10.3 speed for an eighth is plenty fast enough for the kind of filly we anticipate her being.

Once the Data Track information and video review of her work were completed, we conducted a physical inspection on the filly. Marc looked at 124 horses for the sale and short listed 16 individuals for a 13% strike rate. Based on these numbers we obviously set a high bar for the type of physical animal we wanted to purchase, and this filly stood out as one of the best. Size-wise she isn’t small or overly large. We would describe her as being an ideal type that should finish out at 15.3 to 16.0 hands. She stands over plenty of ground and possesses a very strong gaskin and hip. She is correct through her fore limbs and tracks well through all four legs. Walking, she has a very loose stride and reaches out a long way with her hind limbs. As opposed to the short, stabby walks we don’t like.

After the physical inspection this filly was one the few remaining horses on our list for potential purchase and the only thing left to do was have her vetted out. Upon vet inspection it was found that there were no abnormalities in any of her joints except for an old OCD in her right stifle. Marc spoke with her previous owner and she confirmed that the OCD had been there since she purchased her as a weanling but had never caused her any problems. Based on Marc’s conversation with our vet we think it is unlikely to cause her any problems in the future either. As for her throat our vet found that it was structurally sound and functioned well. If anyone has any further questions regarding her vet report, please feel free to call or email Marc or Jared.

Now, with a satisfactory vet report in we decided to proceed with trying to purchase the filly. Luckily, we were the winning bidder at $30,000 and felt very fortunate to have her at such a bargain price. Especially considering Northern Afleet was one of the great value sires standing in North America until his passing last year. He had sired 75 stakes winners, including 14 graded stakes winners, and 137 black-type horses at the time of his death. From 18 crops his progeny have earned more than $77 million. His top runners have excelled on turf, dirt, sprinting and at a route of ground. They include such champions Afleet Alex and Amazombie as well as Breeder’s Cup Mile winner, World Approval. Other top offspring include Teaks North, Evening Jewel, War Story, Denman’s Call and Big City Man.

The filly’s dam, Five Yard Penalty, was stakes placed in Canada. She won four races from ages 2 to 5 and more than $40,000 CD. Her first foal is a 3YO gelding by Run Away and Hide. He has hit the board in 4 of 7 starts and earned more than $25,000 racing primarily at Gulfstream Park.