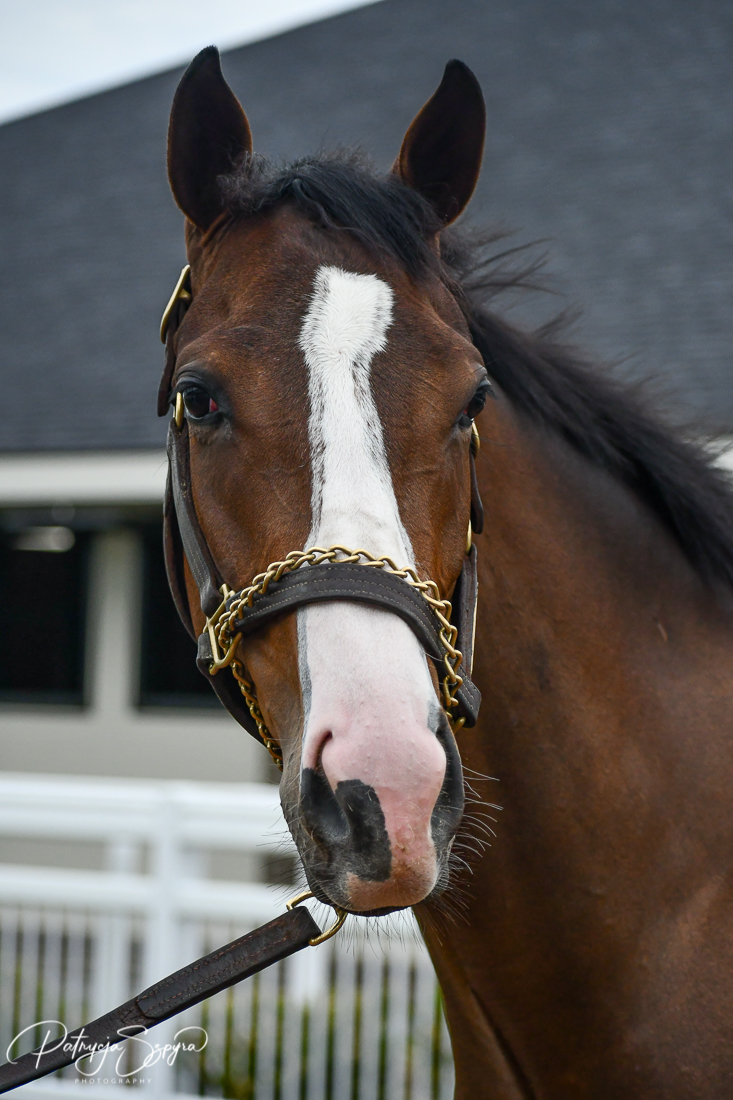 We are excited to introduce the newest member of the Pocket Aces Racing LLC Stable – a 2-year-old filly by Will Take Charge out of a young Indian Charlie mare, Reading Room. Marc has had a connection with the filly since early 2019 and has been keeping an eye on her development for the last 16 months. In late 2018, a client that Marc had purchased some mares for, approached him about purchasing a short yearling, to pinhook later in the fall, at the 2019 OBS January sale. Marc could not attend the sale so he suggested the client use a bloodstock agent named Jun Park to assist him, as Marc knew Jun would be at the sale. Jun and Marc have worked together for more than 20 years because their “eyes” are so similar. Marc knows what Jun is looking for in a horse and vice versa. In addition, Jun has purchased many top-class runners on his clients’ behalf (including G1 winner Knicks Go) so he felt like this client would be in good hands. The horse that Jun picked out for Marc’s client is the 2-year-old Will Take Charge filly that is now a part of the Pocket Aces Racing team. After she was purchased in Ocala, the filly was shipped to Kentucky to be turned out for several months and then begin sales prep for the 2019 Keeneland September Sale. While Marc mainly helped this client with his mares, he did check in on her periodically while she was in Kentucky and always reported that he was happy with her progress.

Flash forward to the 2019 Keeneland September Sale. Marc inspects the filly for his client when she arrives on the Keeneland Sales grounds, reporting that she is in great condition and he anticipates her selling well. The next time Marc sees the filly is a couple of days later when she is in the back sales ring. Marc is watching yearlings walk around the back ring with an eye to purchase one for Pocket Aces Racing. He doesn’t always refer to his catalogue when he’s looking this way, as he just watches the horses go by. If something catches his eye, he’ll look up the pedigree. Marc had just such a horse he was keeping an eye on when his client that owned the Will Take Charge filly came up to him and let him know the filly would be selling soon. Marc asked where she was, and he pointed out the filly he had been eyeing all along. Marc had seen literally hundreds of horses that day and was so focused on each individual’s walk, conformation, etc., he didn’t immediately realize that the filly he liked was the one that belonged to his client. Marc saw this as a real testament to how much he liked the filly. He wasn’t looking at her through “rose colored glasses” because he wanted his client to do well (sometimes it’s hard not to be biased with horses you’re involved with). He had seen several hundreds of horses over the previous days and this filly genuinely stood out. At that point, Marc decided there was no reason why he shouldn’t pursue the filly for Pocket Aces Racing and started asking his client how much he wanted for her, whether he might want to stay in for a part of her, etc. in anticipation that he might try to buy her. As this was happening, Marc spotted another filly, only 19 hips later than the Will Take Charge filly, that he liked just as well. It goes that way sometime. You can spend hours or days without seeing anything you like, and then, suddenly, you find 2 or 3 you like within several hips of each other! The other filly was a Munnings filly out of a young Scat Daddy mare. From what he saw in the back ring Marc liked both fillies equally (they both had good size, quality, scope and seemed very athletic), however, it was just too hard to pass up a Munnings out of a Scat Daddy mare. Marc wanted to be prepared to go to $40,000 on the Munnings filly, which meant he had to let the Will Take Charge filly go despite that fact that he would have loved to have them both. If it took $25,000-$30,000 to buy the Will Take Charge, he just wouldn’t have enough “dry powder” for what he anticipated the Munnings would cost. In the end, we passed on the Will Take Charge filly and ended up buying the Munnings filly – and that is how we bought Slightly Sassy. As fate would have it though, Marc’s client didn’t get his price for the Will Take Charge filly, which meant, fortunately, we might get another chance at her down the road.

A little over a month ago Marc got a call from the client that owned the Will Take Charge filly asking for help with her. He had entered her in the 2020 Fasig-Tipton Texas 2-year-old in-training sale and despite the fact that she had been preparing extremely well for the sale (the consignor thought she could pop a 10.1 or 10.2 breeze time) he was forced to make alternate plans for her because the sale had been cancelled due to COVID-19. The reports on her had been so favorable from her trainer in Texas that the client had once again decided to just keep her, and race her for himself, rather than try to force his way into another sale later in the year. He needed assistance getting her ready to go the races, so he enlisted Marc’s help to manage the process. The first thing Marc recommended was getting her to Blackwood Stables in Versailles where he, along with their team, could assess her. She arrived at Blackwood about a week later and he could tell straight away why everyone in Texas (Marc spoke with them directly before she left) was so impressed by her. Since he saw her last in September, the filly had grown up and filled out some more and she still had that big walk and athleticism that first caught his eye in the back ring. Over the next few weeks, she started galloping at Blackwood and the team commented regularly on how smart she was and how much she liked to train. As Marc began checking in weekly with the client, it came up that Pocket Aces Racing had been interested in her at one point and Marc remarked that we would still be interested in her as she had done nothing but improve and move forward since he last saw her. Since the beginning of May we have been working out a deal to acquire the filly and are very happy to announce that she is now part of the team.

The filly is currently working quarters (see video below from May 14) and we plan on working her a couple of more times before making a decision on whether or not to give her a short rest before going on to the racetrack or proceeding with her training and getting her to the track in the next 4 weeks or so. Regardless, we do not feel like she is a filly that will need a lot of time. If she is given a break, it won’t be very long, as, for the time being, she strikes us a summer 2-year-old.

A full share represents 10% ownership and costs $5,900. A half share is $3,100. A quarter is $1,650 and an eighth is $925. All expenses are covered through September. After that, expenses are billed quarterly at $1,300 per share if necessary. Don’t miss out on this filly that could be at the track before the end of June. Contact one of us NOW with questions or to reserve your share!!!