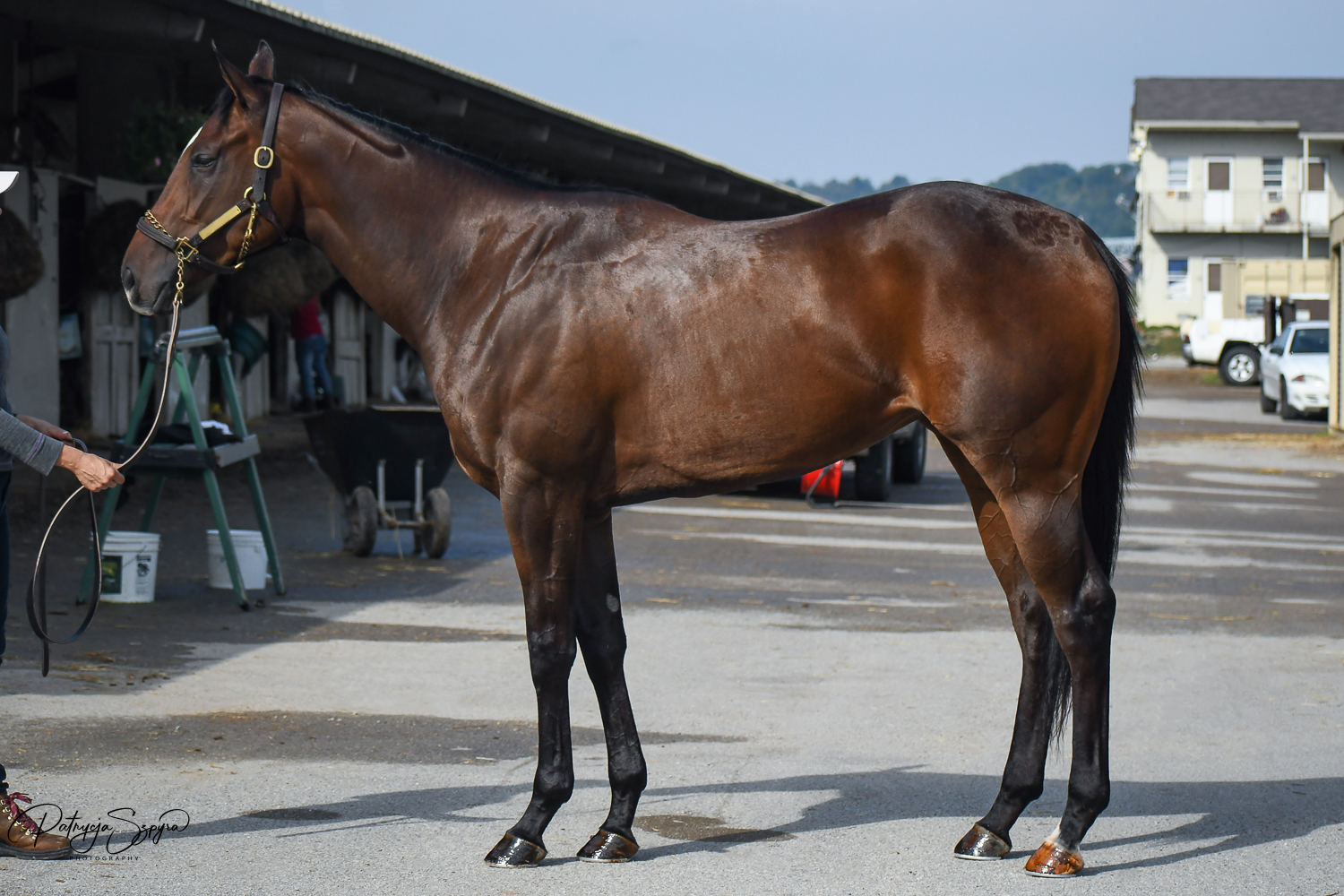 Since our Ohio based trainer, Susan Anderson, owns the dam of our Ohio bred Stakes winning filly, Windy Lu Who, we like to touch base with her every year about Windy Lu Who’s younger half-siblings. Purchasing 60% of Windy Lu Who from Susan was obviously a great private deal for Pocket Aces Racing and we’d love the recreate that magic again. With that in mind, we started asking Susan about Windy Lu Who’s current 2YO half-sibling earlier this summer. She let us know that Windy’s current 2YO, half-sibling, was an Ohio bred gelding by Cinco Charlie and he was named Buckeye Charlie. At the time, he was at a small training facility in KY, just galloping, so Susan and Marc decided to wait until he came to Susan’s barn at Belterra to inspect him and pursue a possible deal. Buckeye Charlie made it to Belterra in mid-September and Marc went up to inspect him. Unfortunately, Marc didn’t think he was the right fit. Marc let Susan know, and that, was pretty much that.

As Marc was leaving though, he asked Susan, “Don’t you have 2 mares you breed every year? Does the other mare (the one that isn’t the dam of Windy Lu Who) have a current 2YO that you have in training?”, to which Susan replied, “Yes, she got in the other day and she’s just down shed row”. Marc promptly asked if he could see her. The filly Susan showed Marc is a 2YO Ohio bred by Bodemeister out of her mare named Female Drama. The filly’s name is Bode’s Rose and the first thing Marc told Susan when he saw her stood up was, “This is the one we want!”.

Bode’s Rose has average size. Not too big and not too small – a handy filly, like we prefer to see. She stands over a good amount of ground and her strength is well balanced. Marc really liked her frame as well, commenting favorably on her shoulder angle, cannon to forearm ratio and the shape of her hind leg. In addition to being a gorgeous physical specimen she is extremely athletic on the move with a huge reach in her hind limbs and great coordination in her front limbs. In addition to her many positive physical attributes, the filly just radiates quality. While it’s difficult to compare Bode’s Rose and Windy Lu Who physically (they’re 2 different sorts of horses so it’s hard to make an “apples to apples” comparison) what the 2 have in common is that that they are both Ohio breds with tons of quality. Marc emphasized the quality aspect because we’ve been in the Ohio bred market for quite a few years now, so he’s inspected a lot of them, and it’s difficult to find any that have the kind of quality these 2 fillies have. If you find an Ohio bred with this kind of quality, you really have to take notice because they are so different from the others. We know what that has meant for Windy Lu Who and we’re hopeful it translates into the same kind of success for Bode’s Rose.

The easiest part of the deal to add Bode’s Rose to the Pocket Aces Racing stable was the question of whether or not she was good enough to join the team. The much more difficult aspect of getting her on our roster was convincing Susan to sell part of her. When Marc came to Belterra to inspect Buckeye Charlie, Susan had every intention of selling at least half of him to Pocket Aces Racing. She had no intentions of selling any part of Bode’s Rose to anyone. Susan had been advised by the trainer who broke Bode’s Rose and got her ready for the track, as well as several other horsemen that she trusts (who had seen Bode’s Rose) that the filly had a chance to be something special. Armed with that information, Susan was perfectly willing to race her on her own. Because of this, it took several days of haggling, arm-twisting and number crunching but we were finally able to reach a deal with Susan to purchase 50% of Bode’s Rose. Susan will retain the other 50%.

Bode’s Rose is by Bodemeister, the sire of earners of over $26,000,000 from 6 crops. His best runners include Kentucky Derby-G1 winner Always Dreaming, Grade 1 winner Bodexpress and Graded Stakes winners American Anthem, Wholebodemeister, Informative, Yuvetsi, Cheermeister and Once on Whiskey. She is out of the mare Female Drama who is, in turn, by leading broodmare sire Indian Charlie. Bode’s Rose is a half-sister to Startdfromdabottom, a 3YO colt by Kantharos, that Susan bred and sold for $70,000. Startdfromdabottom made his racing debut at Keeneland this time last year and he has compiled a record of 10-3-1-2 $68,036 since. Bode’s Rose is also the half-sister to current allowance winner Flashy King George.

The filly is currently in training at Belterra Park.  She is scheduled to have her first official breeze at the track later this week.  As with our other Ohio-breds, she will race primarily in Ohio.  She’ll be based at Belterra Park from where she can ship to Thistledown or Mahoning Valley.  She will winter at Turfway Park in Northern Kentucky.

There are only five shares available.  We don’t expect them to last long.  The filly is eligible for our multi-horse discount program.  Please reply to this email or call Marc (859-312-6272) or Jared (606-922-9325) with questions or to reserve your share today.