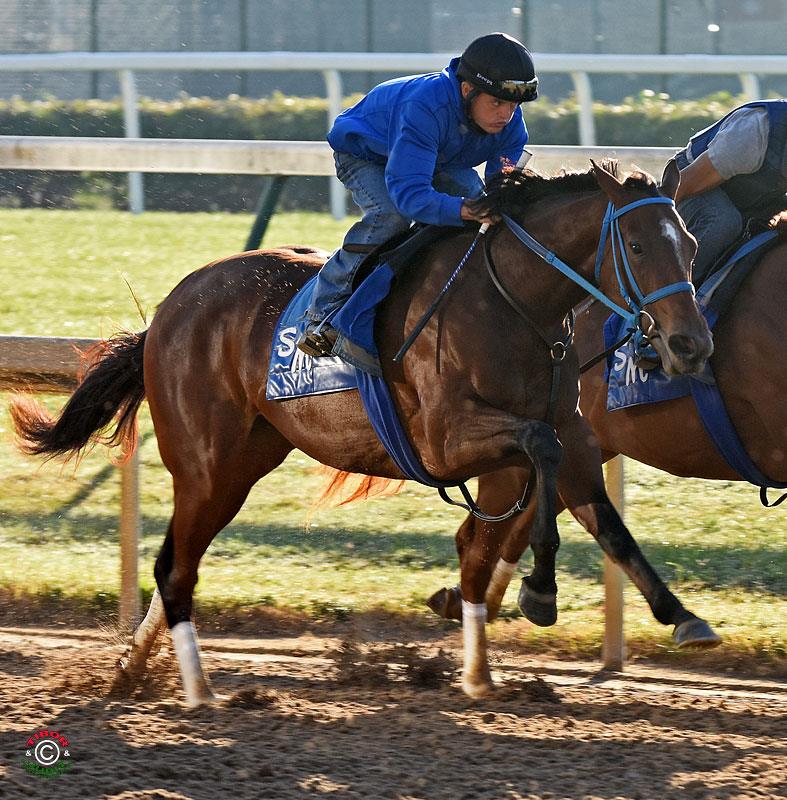 Pocket Aces Racing, LLC has recently added several new racing prospects to its growing stable and one in particular is quite unique in that she is a 2-year-old filly already training at Churchill Downs with Steve Margolis. Her name is Nineteenth Street and she is by Proud Citizen out of a stakes-placed Malibu Moon mare named Ms. Sabbatical. Personally, I am very familiar with Nineteenth Street as I purchased her mother on behalf of Maryland breeder, and long-time Pocket Aces Racing partner, Mr. Alan Burkhard, in the fall of 2008. When Nineteenth Street was born in March of 2014 she was already a standout. At 120 pounds she was a very large newborn and you could tell that as she matured she would develop into a powerfully built filly just like her mother. Through the first year of her life we continued to be very pleased with her physical progress.  While Mr. Burkhard usually prefers to sell the produce out of his mares he has always been willing to take a chance on racing a filly out of one of his mares that he believes will have real talent.  So the decision was made in 2015 that Nineteenth Street would not be put in a yearling sale but kept for racing. Around that same period, Pocket Aces Racing LLC and Mr. Burkhard’s Somewhere Stable KY LLC were embarking on their first venture together – a 50/50 deal, which Pocket Aces would manage, on a Lemon Drop Kid filly that he bred. Over time the Lemon Drop Kid filly would be named Close the Gap and that partnership proved so beneficial for both sides (Close the Gap won first time out last June and while she’s had some tough racing luck since we all think she still has a great deal of potential) that it only seemed natural for the two parties to partner up again on Nineteenth Street.

Nineteenth Street was broken and started her training career with Woodford Thoroughbreds in Ocala, FL. While she was there farm manager Scott Kintz reported to us that Nineteenth Street was always a straight forward filly that showed a keen interest in her training. By the late spring of this year Nineteenth Street was ready to move on to the next stage of her training so she was moved to the Marguax Farm training facility in Midway, KY. While she was there Nineteenth Street progressed nicely and was up to breezing 3/8 by late summer. Farm trainer, Dermot Littlefield, told us that he was most impressed by her determination not to let any horses pass her while training. Currently, Nineteenth Street is based at Churchill Downs with Pocket Aces Racing trainer Steve Margolis. She has already worked her first half-mile and is set to work her 2nd, and stronger, half-mile the weekend of October 15-16. Steve has echoed the same sentiments as Nineteenth Street’s previous trainers in that she is a filly with a great mind that loves to train. As long as there are no setbacks (a caveat for every young horse) we anticipate she could have her 1st start in the next 4-6 weeks.

We would also point out that Nineteenth Street is by a stud, Proud Citizen, that has shown a very strong bias for siring top class fillies. In fact, he is one of the few stallions to have sired two Kentucky Oaks-G 1 winners in his career:  Proud Spell ($2,131,610 earner) and Believe You Can ($1,280,324 earner). In addition, he is the sire of Steve Margolis trained Miz Ida who won the Valley View S.-G3 at Keeneland on her way to earning $484,998.

A full share in the filly represents 9.9% ownership and costs $7,500.  Half shares are available for $3,800 and quarter shares are $1,950.  Expenses are covered through the end of this year.  Expenses are then billed quarterly, if necessary, at $1,200 per full share.

We have just 4 shares still available.  Please contact us as soon as possible if you are interested in this nearly race ready 2YO filly.