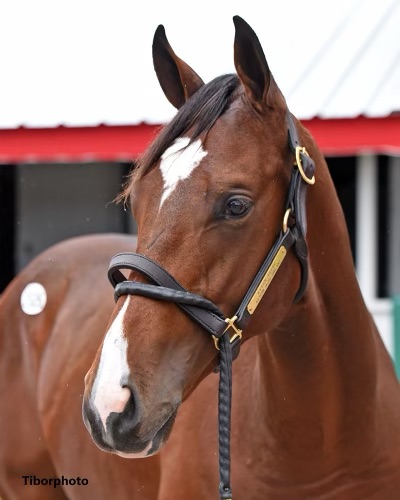 Pocket Aces Racing LLC is happy to introduce our new colt by Astern (AUS) out of Sibilant, by Street Sense.  He was purchased at the Keeneland September Yearling Sale earlier this week for $28,000.  In the frenzy of the sale, we think this colt was overlooked, particularly by pinhookers, and we were fortunate to bring him home at what we believe, is a bargain price.

For the majority of the sale Marc stood in the very back ring and inspected horses as they started the 30–40-minute process of making their way to the sales pavilion. However, we did have bloodstock agent Jun Park, whom we’ve worked with in the past, looking at horses back at the barns. Marc would pay special attention to the horse that Jun had flagged from his inspections the previous day. That process was in full swing Tuesday as Marc was leaving the sales pavilion (he had just bid on one that we didn’t get it) and working his way toward the back ring as he knew a colt from Jun’s list was coming up – hip 2926. When he got to the back ring, Marc ran into Kevin Nohltmeyer, our trainer at Silver Springs. Kevin had been there for a while, watching horses go by, and quickly asked Marc “have you seen hip 2926? He looks like the real deal.”  Marc told him that was the very horse he’d come to see!

The fact that 2 members of our team had singled this horse out, independently of each other, was a very favorable sign. “When I got a chance to see the colt, I was not disappointed,” said Marc.  “When I first saw him, he was walking at me, and I was pleased to see he was tracking well through his knees and ankles. Looking at him stood up, I thought the colt had great balance and his hip and shoulder angles were ideal. As with all the horses we try to buy he covers a lot of ground just standing there and we hope that translates into a long stride on the track. I also liked the fact this guy looked a little soft and babyish. I don’t necessarily like yearlings that look like miniature racehorses…ready to have the tack thrown on them and go to the starting gate. In my experience, those horses are the best they’re ever going to be at the yearling sales and that doesn’t help us at all. I think the best of this colt is definitely ahead of him. He’s a handsome horse now but next summer, after we’ve started breezing him and he starts to really “tuck up”, he’ll develop into a very imposing racehorse. He also handled himself very well mentally. Despite being pulled out several times by lookers and a horse in front of him almost getting loose, he kept his composure the entire time.”

The colt does have a couple notations on his vet report.  The vet tells us he has a few flakes that will most likely be absorbed and never be an issue.  Should our vet decide they need to come out arthroscopically, the seller has agreed to pay for the procedure.  That small potential for a delay in his early training is what most likely caused pinhookers to pass on him and kept his price relatively low.

Astern (AUS) was a four-time graded stakes winner in Australia with $884,734 in earnings from a 5-2-0 record in nine starts. He is the fastest son of Medaglia d’Oro at stud with a 126 Timeform Rating.  He is a top-10 first crop sire in North America with multiple stakes placed runners, including Mainstay who ran second in the GIII Schuylerville at Saratoga.  He has a pair of southern hemisphere stakes winners and the second-place finisher in the GIII Caulfield Guineas in Australia.

Sibilant is a Godolphin home-bred daughter of Street Sense.  She was a winner in five starts with earnings of $9,600.  Street Sense is a top-100 broodmare sire in the northern hemisphere.  He is represented by 95 winners and 6 stakes winners and nearly $5.3 million in earnings from a relatively small number of starters (205).