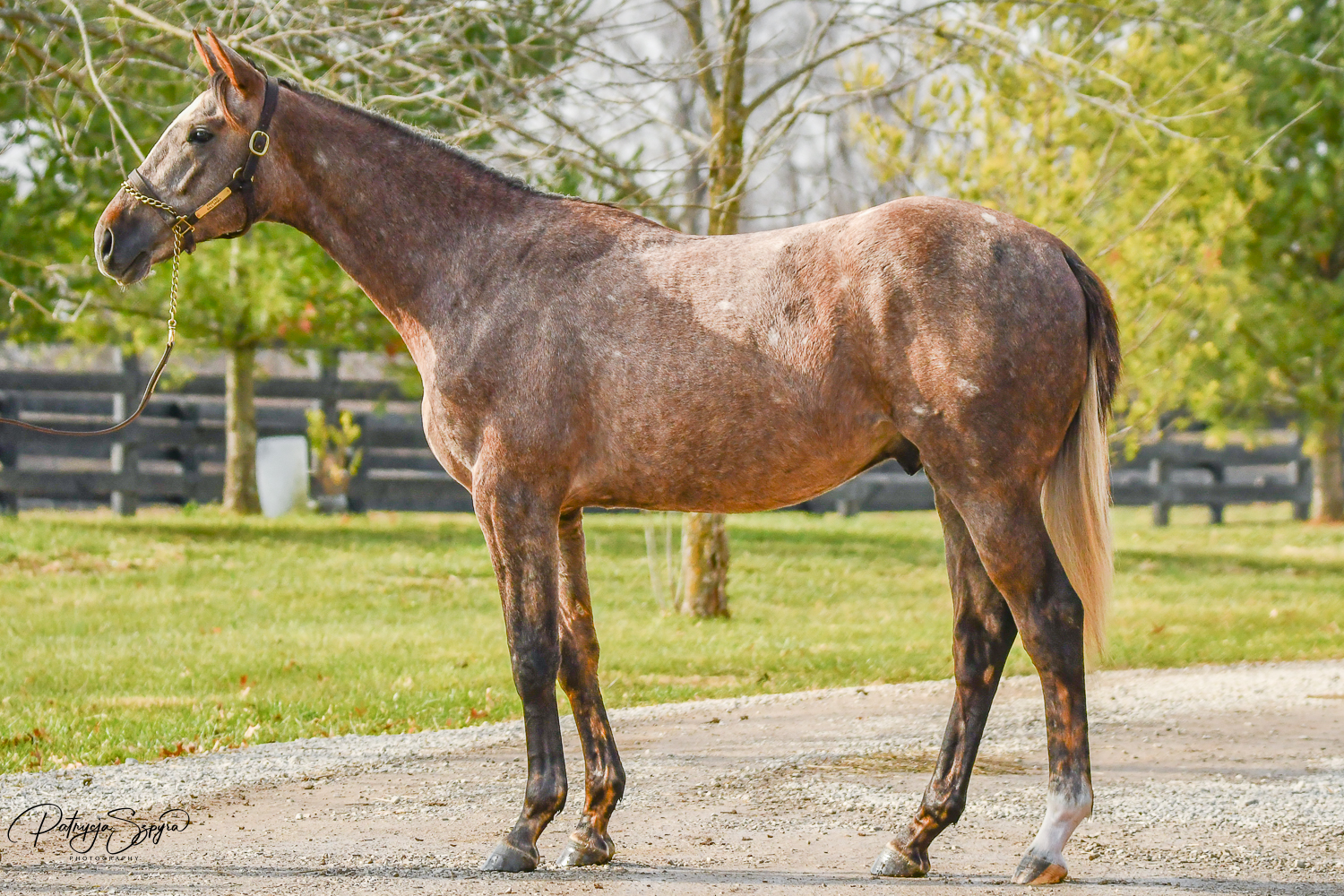 Pocket Aces Racing LLC is very excited to announce the newest member of our stable, a yearling colt by Frosted out of Sallyport, by Flower Alley.  We are very happy to be racing him in partnership with Somewhere Stables LLC.  We hope it will be a partnership as successful as we had with Nineteenth Street, our stakes placed filly and winner of six races and more than $220,000.

With his strawberry roan coat and lean physique, this colt looks like he could be a son of Tapit, not a grandson.  The colt has plenty of size with a great deal of leg underneath him. He stands over a lot of grand and has the type of strength in his forearms, gaskins and hip that should allow him to excel at distances beyond a mile.  For the most part, Tapit’s progeny aren’t heavily muscled or “quarter-horsey” types.  They tend to do their best running over two turns and it is typically not easy to carry bulky muscle over 9 or 10 furlongs.  Whether walking in shed row or training on the track, it is very easy to get a sense of his athleticism.  He has a long reach with his hind legs and plants and drives well with each stride.

Frosted holds the record for the fastest Metropolitan Handicap-GI.  He completed the mile in 1:32.3 and won by a stakes record 14.25 lengths.  Some of the greatest racehorses in history (Native Dancer, Kelso, In Reality, Forego, Holy Bull and Ghostzapper) have won the Met Mile, but none were as fast as Frosted. He was also anything but a “one race wonder” as he earned more than $3.9 million and won the Belmont-GI, Wood Memorial-GI, Whitney-GI, Jim Dandy-GII and Holy Bull-GII. Frosted’s sire, Tapit, is fast establishing himself as a sire of sires.

Sallyport is a young mare whose sales history is certainly suggestive of an outstanding physical specimen.  She was purchased as a yearling at the prestigious Fasig-Tipton Saratoga Select Sale for $210,000.  When she was offered as a broodmare several years later at Keeneland November, she commanded a final bid of $200,000.  Her immediate female family has enjoyed success at the highest levels all across the globe.  Top performers include Distorted Humor (graded stakes winner and leading North American sire), Never Retreat (GI winner in the US and Canadian Champion), Bannock (stakes winner and Group stakes placed in Europe) and Moulin Lady (stakes winner in Australia).

The colt was inspected and later accepted for the Fasig-Tipton September Select Yearling Showcase Sale.  When the breeder and seller did not get his asking price, we immediately though there could be a place for him in our stable.  We decided to wait to see how his training came along.  As Marc is also the racing manager and bloodstock advisor for Somewhere Stables, he has been getting regular updates and has been out to watch him train numerous times.  While it is still very early, Silver Springs tells us he is exceptionally intelligent and picks up on all his lessons at first asking.  Most encouraging, the colt has already displayed a competitive streak.  He is a very willing participant in his training, and he goes with his head down and exhibits a desire to be in the lead when he’s on the track.  Marc has always liked the colt physically, but with the early reports from the farm, we felt like we needed to bring him into the fold.