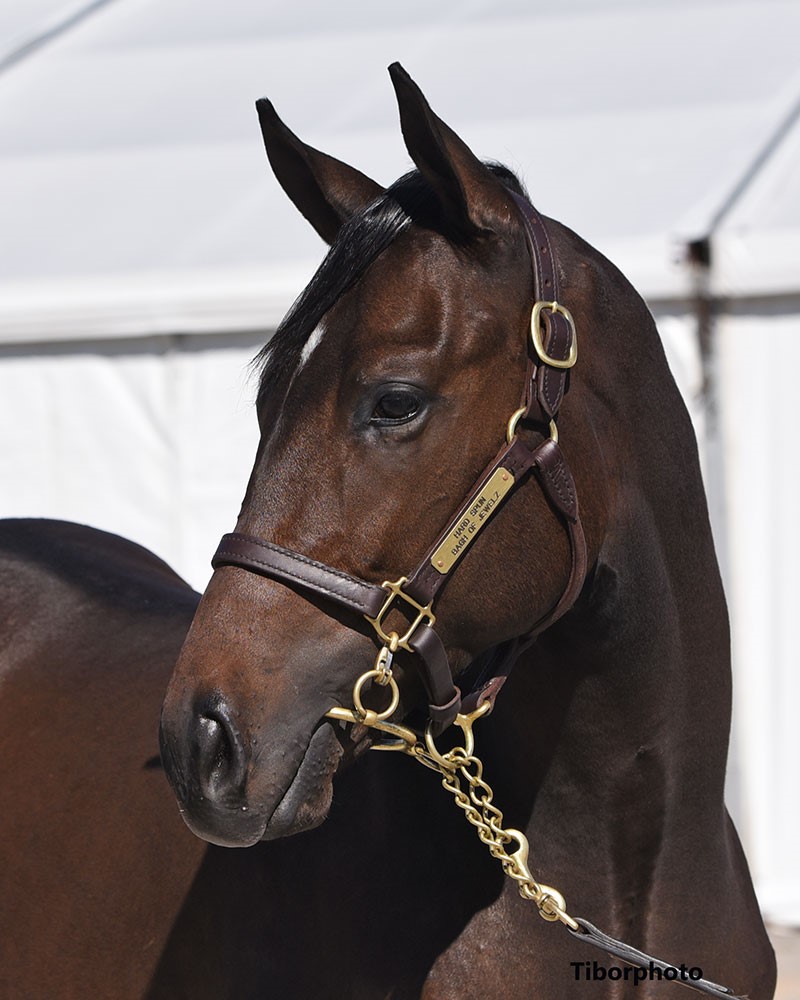 Pocket Aces Racing LLC is very happy to introduce the newest member of our stable, a yearling colt by Hard Spun out of Bagh of Jewelz, by AP Indy. We purchased the colt earlier this week at the Fasig-Tipton October Yearling Sale.

Hard Spun is a perennial top sire in North America. He currently ranks #10 with progeny earnings of over $9 million in 2021. He has sired graded stakes winners such as Wicked Strong, Silver State, Hard Aces, Questing, Le Romain and Hard Not to Like. He has graded stakes winners on dirt and turf.

Bagh of Jewelz is an unraced daughter of the great AP Indy. She has five foals to race, all five are winners including stakes placed Grandaria and our colts full-brother, Hawthorne Derby winner, Mohs. The female family includes Baghdaria, Shakleford and Lady Joanne.

Marc was at the sale on Wednesday morning and came across Brookdale Sales’ Joe Seitz. Marc and Joe have known each other and worked together for around 20 years and Marc has a great deal of respect for Joe’s opinion on a good horse. Joe has raised Derby Winners I’ll Have Another and Monarchos as well as Grade I winners Bodemeister, Noble Bird, Stopchargingmaria, Tapit and the list goes on and on. Marc told Joe we were in the market for a nice racing prospect in the $30,000 – $40,000 range and asked if he had anything that might fit the bill in his consignment. Joe told Marc to be sure to be around to look at Hip 896. He said that he had gotten the colt on the farm at the beginning of the year and prepped him for the sale. Joe added that he thought the colt was one of the better racing prospects on the farm this year, but he wasn’t getting much attention from people looking at the sale. Not great news for Joe, but potentially great news for us.

Hip 896 arrived at the sales ring approximately 30-40 minutes later. He did not disappoint.  He is a good-sized colt but isn’t bulky. He is rangy and looks like he’ll have a big stride. He has a big walk and moves athletically through his forelimbs and reaches out well with his hind limbs. He does toe out slightly in his right front but walks through it well. As you should be able to see in his picture, the colt has a great deal of quality. He also showed himself to be very classy the entire time in the sales ring. Several other colts were in the back at the same time and were acting up quite a lot. This colt remained calm and cool the entire time. “After the physical inspection, I knew we were going to pursue this colt as long as the vetting was okay,” said Marc.

His vet report showed a Grade 1 throat and no significant issues other than sesamoiditis in the right front. Sesamoiditis is broadly defined as inflammation in the ankle joint. “I have always associated it with typical growing pains in young horses,” said Marc. “It’s something you see a lot on these vet reports as these very young horses are getting more exercise than ever before as they go through sales prep.” We’ve actually found it to be a good way for us to find value in purchasing yearlings. Pin hookers simply can’t afford the time off the horses need to allow the issue to resolve itself. They have to have these young horses doing speed work within a couple months from purchase to get them ready for the 2YO sales.  On the other hand, we can be patient and allow them to grow out of it. The vet report also showed that a surgery certificate was on file for the colt. This likely scared off even more buyers that didn’t take the time to find out what the issue was. Joe shared with us that the colt had a colic scare when he was just a month old. They did exploratory surgery out of an abundance of caution and found that the colt was just fine. Joe assured us that there hasn’t been a problem since.

At this point, we were determined to bid on the horse. Based on what Joe had shared about the lack of attention, we thought we had a shot to bring him home. “I really thought we might get a good bargain,” said Marc. “And then they announced that the colt’s FULL brother had just won the Hawthorne Derby. So much for the bargain, I thought. I’m going to have to blow the budget.”  Shocking to us, the bidding started slowing down fairly quickly and the colt hammered home for just $20,000.  Marc saw Joe immediately after signing for the colt. He shared that he thought the colt might get to $50,000, but if anyone was going to get such a great deal, he was glad it was Pocket Aces Racing.

Ownership opportunities start at just $925.  Expenses are covered through AT LEAST December 31, 2021.  Expenses are then billed quarter at $1,500 per FULL share when necessary.