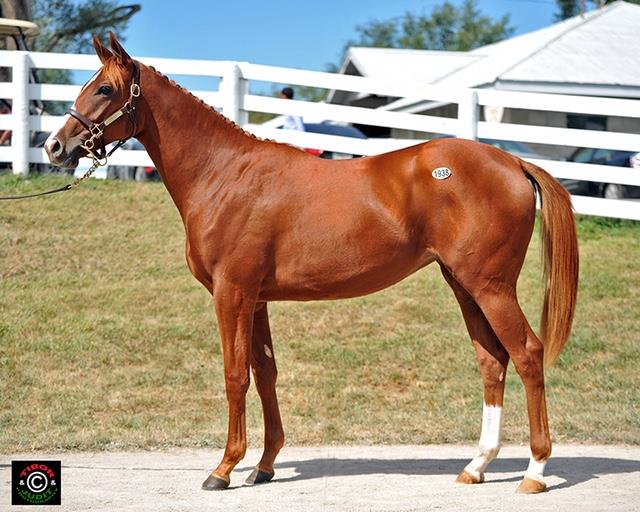 We are excited to announce the additionof a gorgeous and very racy looking filly by 1st crop sire Haynesfield to our stable.The story of how we acquired this filly is a very interesting one indeed.I walking between barns at Keeneland when Bret Jones (son of former KY Governor Brereton Jones and owner of Airdrie Stud) approached me to say they had just brought back a filly that failed to meet her reserve. He explained that she was the 4th horse through the ring that morning (it is notoriously difficulty to sell a horse that is one of the first ones to go through the ring) and she didn’t reach her reserve of $15,000, in large part because there just weren’t any Buyers around yet. He went on to tell me that she was an excellent individual and thought she would be a steal at $15,000. I could tell Bret really wanted me to take a look at her and I didn’t want to be rude, so I pulled her out for an inspection. When I saw her I was very pleased to see that Bret’s assessment of her was accurate. She is a leggy filly with a depth girth and a real quality look about her. I would also describe her as a rangy filly that stands over a lot of ground. She is correct through her knees and ankles and has a big, loose walk from her hip. She looks like she has 2-turns written all over her. After I saw her I thanked Bret and told him, “I’d have to think about it because I really had a bunch of other horses to see”. When I got to my next barn and started looking at horses though I found that I couldn’t get the Haynesfield filly out of my mind so I stopped what I was doing there and went back to Airdrie. I looked at her again and I liked her even better than before so I told Bret we would give him $14,000 for her. His response was that unless they got the $15,000 they were fully prepared to race her. He went on to add that I was actually the only person who could buy her at $15,000. His father, Governor Jones, had decided in the time that I was gone that he really wanted to keep her and race her himself and would not price her to anyone else. However, since they had already given me the price of $15,000, they would honor that number for me. I wasn’t going to squabble over a $1,000 and I knew full well the Governor has bred and raced many high-class runners, many of whom were sales RNA’s, so I told them we would take her at $15,000. After we purchased her the Governor pulled me aside and said the reason he had made up his mind to race the filly, had we not purchased her, was because the first mare he ever owned went straight back six or seven generations directly to this filly’s mother. He added that in every one of those generations each mare had produced one or more significant stake horses. As for the filly’s male line she is by the exciting young sire Haynesfield. Haynesfield stands at the Governor’s Airdrie Stud and he himself is by the perennially leading sire Speightstown – currently the 6th leading sire in North America and commanding an $80,000 stud fee. It is also important to note that Haynesfield was a tremendous race horse himself. He won stakes at 2, 3, 4 and 5 while earning over $1,300,000 and capturing the prestigious Jockey Club Gold Cup-G 1 at Belmont Park. Hanynesfield’s first crop are 2-year-olds of 2015 and his leading runners to date are C U At Eau Claire (winner of the $100,000 Sadie Diamond Futurity) and Realm (winner of an $83,000 MSW at Saratoga). We areextremely excited about this filly and think she represents a tremendous value play relative to her potential. If you have any further questions regarding our future plans with her, share pricing or general information please feel free to call Marc at 859-312-6272 or Jared Shoemaker at 606-922-9325 or email us at [email protected].