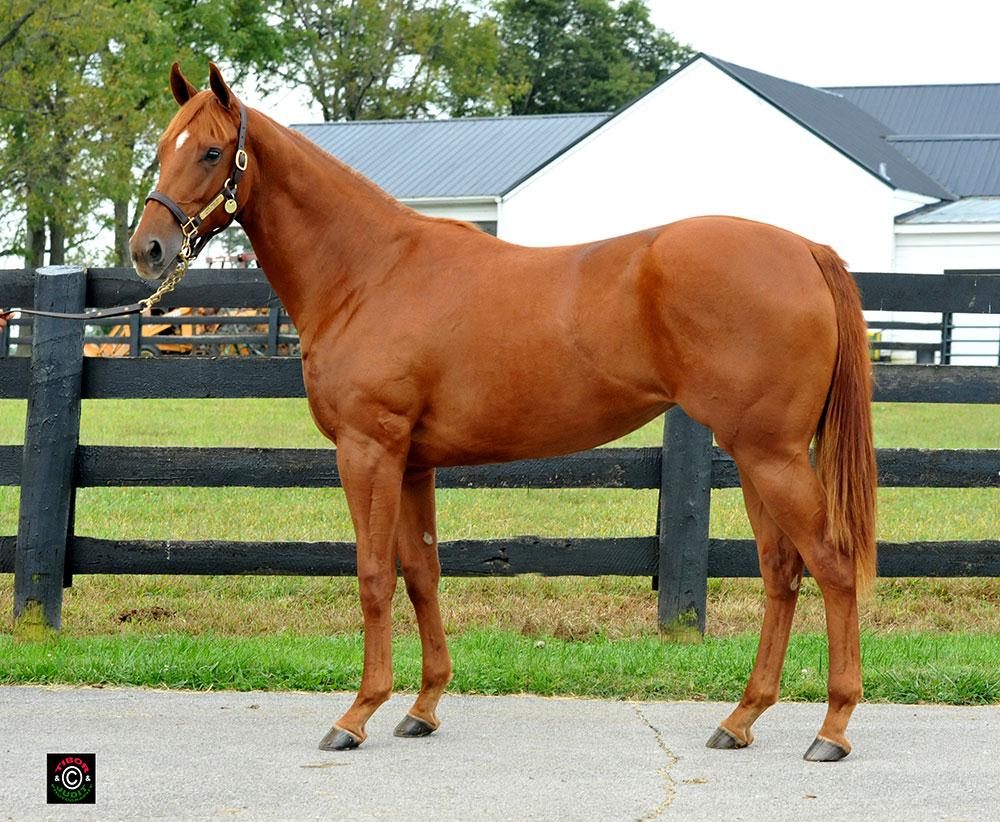 Pocket Aces Racing, LLC is extremely excited to announce that we have added a new filly to our stable. She is by one of North America’s leading sires, Lemon Drop Kid, and out of a 7 year-old stakes-placed Mineshaft mare named Bell’s Shoes.

This filly represents a very unique opportunity for Pocket Aces Racing. In addition, she is very special to me personally since I have been around her since the day she was born. Actually, I’ve been involved with her since before she was born. As many Partners are aware, I not only serve as the Racing Manager for Pocket Aces Racing, LLC but I am also the General Manager for Mr. Alan Burkhard’s Somewhere Stables KY, LLC. Somewhere Stables KY, LCC is a commercial thoroughbred breeding venture owned by Mr. Burkhard (who, by the way, is a avid supporter of Pocket Aces Racing as he has purchased at least 1 share in every single horse we have ever syndicated) and I purchased this filly’s mother on his behalf for $125,000 at the 2012 Keeneland November sale with this filly in her belly. I have seen her foaled, weaned, huddled up in the run-in shed with the other foals in January, shed her winter coat in the spring and ultimately develop into a strong and athletic racing prospect.

Because Somewhere Stables Kentucky is a commercial venture Alan decided to enter her in the 2014 Keeneland September Sale but we ran into a complication before the sale even started. She was assigned Hip number 2223 which fell on the 2nd day of Book 3. In the big picture that’s pretty much in the middle of the sale and not a terrible place to be but based on her breeding and physique Alan had high hopes for her. Hopes that would have been much easier to achieve in Books 1 or 2 but it’s a spin of the roulette wheel with Keeneland and their hip numbers and you go where they tell you to go. Going into the sale the consignor and I advised Alan that she was too nice to “give away” and that he should at least set a reserve of $50,000 (we both knew that Alan was in the fortunate position of not having to sell the filly and he could take her racing if he didn’t get his price). Ultimately Alan set a reserve of $65,000 and the last live bid on her in the ring was $60,000 so he kept her. Some buyers even made offers after the sale, looking to see if Alan had “seller’s remorse” but he stuck to his guns – $65,000 or he was keeping her to race. Now, here’s where Pocket Aces Racing comes in. Knowing what a supporter Alan has been of Pocket Aces Racing, and knowing how much I like the filly myself, I asked Alan if he had any interest in letting us syndicate a portion of her. Fortunately for us, he did. It has taken a week or so to hammer out the details but we now have a deal in place to syndicate 50% of the filly. She will be managed by Pocket Aces Racing, LLC, exactly like the other horses in the stable and race in the Pocket Aces silks. Ownership will be listed as Pocket Aces Racing, LLC and Somewhere Stables KY, LLC with Alan reserving the right to name her. He has been extremely generous in affording us the opportunity to syndicate her, letting us manage her and allowing her to run in our silks. We felt the least we could do is allow him to name her. As for the filly herself she has grown into a strong, powerfully built individual. She is correct through both knees and ankles and tracks well in her fore and hind limbs. I think her most impressive feature is her long, flat hip already creased with muscle tone. She also has a tremendous girth which I have noticed over the years as a common attribute of many good race horses. We are always looking for a good walk when we bring a new prospect into the stable and this filly certainly has one. Like the other filly we added to the stable this month she is powerfully built but that doesn’t prevent her from being a loose, agile mover. She is very light on her front end and she uses that big engine she has behind to push off powerfully and drive through hind end. In addition to being an excellent physical specimen this filly represents a chance for our Partners to be involved in one of the best bred horses we have ever had in our stable. She is by Lemon Drop Kid, a stallion that has established himself as one of the most prolific sires of top class race horses in North America. To date he has sired nearly 500 winners, 79 stakes winners and has combined progeny earnings of $53,000,000+. His best runners include Richard’s Kid ($2,000,000+ earner and winner of the Pacific Classic S.-G 1), Lemons Forever (winner of the Kentucky Oaks-G1), Citronnade (winner of the Gamely S.-G1), Somali Lemonade (winner of the Diana H.-G1), Christmas Kid (winner of the Ashland S.-G1), Santa Teresita (winner of the Santa Monica H.-G1), along with many other graded stakes winners. In 2014 alone his progeny have earned over $6,700,000 and he currently stands as the #7 leading sire in North America. This filly’s mother was also a classy runner in her own right. She earned right under $150,000 while placing in both the Martha Washington and Instant Racing Stakes at Oaklawn Park in her career. There are only 5 shares available in this filly and interest has been high. We do not expect shares to last long as we have had a great deal of action on all the available horses this week. For the next 24 hours, shares are available only on a limited basis. They will be made available to the general public on Friday evening. Please contact Marc or Jared to reserve your share as soon as possible.