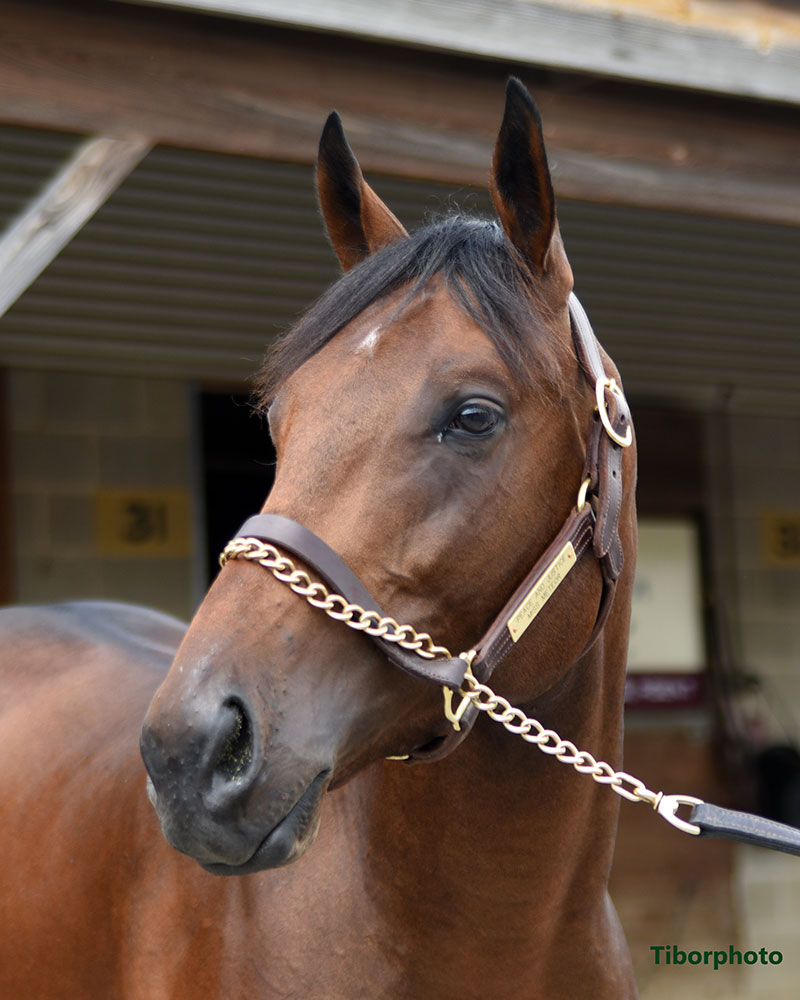 Pocket Aces Racing LLC is very excited to introduce the newest addition to our stable, a 2-year-old Pennsylvania-bred colt by Peace and Justice. We purchased him at the recent Fasig-Tipton Midlantic 2-Year-Old In-Training sale in Baltimore, MD on Monday.

The colt’s sire, Peace and Justice, showed a great deal of promise early in life when he sold for $425,000 at the 2011 Keeneland September Sale making him the 2nd highest priced War Front sold that year. Bloodstock agent David Ingordo (responsible for the purchase of Zenyatta) bought Peace and Justice and was quoted during the horse’s racing career as saying, “He (Peace and Justice) was a gorgeous yearling. Strong, athletic walk. A really well-balanced War Front colt with a lot of scope. From the first day we put tack on him at Mayberry Farm we always felt he was special.”  As he matured, the early promise Peace and Justice showed began to manifest itself when the colt won a MSW at Belmont in his debut. By his 4th start, however, Peace and Justice was not just showing promise – he was displaying world-class talent. On January 5, 2014 he won an entry level allowance race at Santa Anita by 5.5 lengths and become a “TDN Rising Star” in the process. His next start on February 14, 2014 saw him take down a second level allowance at Santa Anita, blistering the turf course in 1:32.36, finishing just 3 ticks off the track record. In early 2014 Peace and Justice was poised to become one of the best milers in the country, however, he was troubled by injuries and setbacks with illnesses over the next few racing seasons. Eventually, his owners decided it was best to see if Peace and Justice, like many well-bred and exceptionally fast colts before him (such as Danzig, Malibu Moon, Maclean’s Music, etc.) that were unable to reach their full potential on the track – could do it in the breeding shed.  It is still very early in his stud career but Peace and Justice has gotten off to an encouraging start. From a limited book of mares he has already sired stakes winner Like a Shaltshaker and earners of nearly $250,000.

Our new colt is the 1st foal out of the “sneaky good” Trappe Shot mare named Miss Meteor. She broke her maiden at Gulfstream Park in a maiden special weight going 7.5 furlongs on the turf. Her other win was an entry level allowance at Monmouth going a mile on the main track. While her career line reads a very respectable 10-2-1-1 with earnings of $73,387 it does not give a completely accurate account of her ability as she missed graded stakes black type by only a length, finishing 4th, in the 2016 edition of the Bourbonette S.-G 3.

While the colt has some very encouraging aspects to his pedigree, however, our decision to purchase him was based largely on the physical individual. Marc was not able to attend the sale, so we had one of our close associates, Jun Park, act as our bloodstock agent. Jun is in a unique position to assist Pocket Aces in the purchase of our horses as Marc has worked closely with him for more than 20 years. Marc and Jun first met in the late 90’s when Jun was hired as Marc’s assistant at Equine Analysis Systems. Both Marc and Jun were trained to inspect horses by Dr. David Lambert so their methods, and preferences for horses, are more alike than any other agent we could deal with.  Jun has served as the U.S. based purchasing agent and racing manager for the Jockey Club in his native Korea. In that capacity Jun has selected multiple grade 1 winner and $4.5 million earner Knicks Go, grade 1 placed Mr. Crow and many other top-class horses at public auction.  Jun inspected nearly 200 horses for us at this sale and he firmly believes the colt we purchased is the best he saw. He felt so strongly about the horse that he even bid more money than we had budgeted. Since he felt so strongly about the horse and knowing his track record – we will forgive him! Jun told Marc that the horse was very well balanced and had an exceptional hip and shape to his hind leg. He also commented that the colt was very light on his feet and was particularly athletic. The colt worked an 1/8 in 11.0 during the breeze show, which is not a particularly fast time, but the colt was a little green through the lane and his rider didn’t do him any favors either. He did show a very good way of traveling as he breezed through the lane and he had an excellent gallop out. According to vet records, x-rays done on the colt following the breeze came back completely clean in every joint and he has an “A” throat.

The colt is scheduled to arrive in Lexington on the morning of the 19th and will be stabled at Silver Springs Training Center. Once he gets there, we will give him a few weeks to rest and get over the rigors of sales prep. After that, he will resume training and we will begin to sort out what we think is the best way forward for him. He is a Pennsylvania bred so he is eligible for the lucrative PA bred program where the level of competition is minimal so we may send him to a trainer in the Mid-Atlantic area. However, there is a possibility that he remains in Kentucky. We will make those decisions as we learn more about him in the coming weeks.