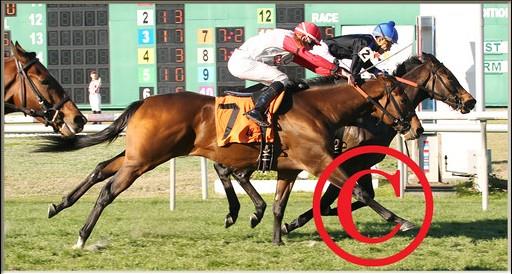 Pocket Aces Racing LLC is excited to announce we have claimed 3YO colt, Sergios Pride, and added him to our stable for syndication. He’s by Florida based stallion Yesbyjimminy (Yes Its True) out of Wild Libby, by Wild Event.

From 9 starts the colt has a record of 1-3-1 and earnings of $36,177. In watching Sergios’ past races, we were particularly impressed when he ran his race and was able to close from way off the pace. He has shown a great deal of versatility with good performances on artificial, dirt and turf.

The colt broke his maiden going 5.5 furlongs on the all-weather surface at Arlington Park as a two year old. He has run a very solid second, with improving Beyer numbers, in each of his last two starts going 7.5 furlongs on the turf.
Our trainer, Steve Margolis, has been extremely pleased with what he’s seen out of the colt and was really happy with how he came out of the race from which he was claimed. We’re anxious to get him into our program and excited about bringing him back to Kentucky for the remainder of the year.