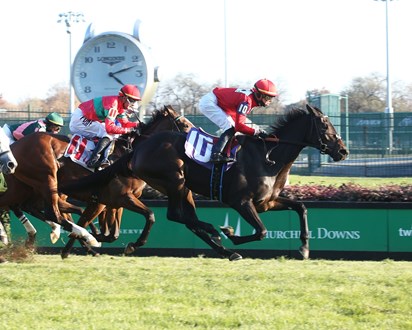 Temple City Terror broke her maiden in the 7th race at Churchill Downs earlier this afternoon. She broke well and quickly got over to the rail settling in toward the back of the pack. She was content to lope along in ninth position about 7 lengths or so off a very slow pace. She kicked out into the four path in the far turn and started to make up a bit of ground, hitting the top of the lane in sixth. She gradually moved up through the lane and with time running out, Tyler gave her a couple taps and she surged to the front and won by about 3/4 of a length.

The early fractions of 24.87 and 50.99 were concerning as we had been hoping for a very quick pace for her to close into. Fortunately, it proved to not be an issue.