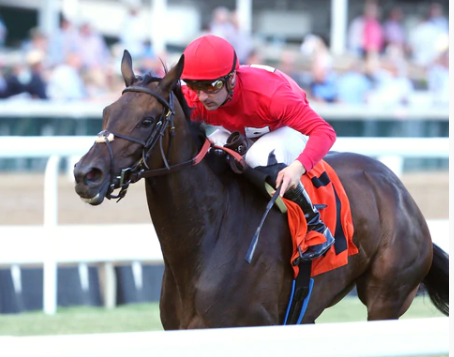 Temple City Terror successfully defended her title in the ninth running of the $153,500 Keertana Overnight Stakes with a last-to-first half-length win over Stand Tall on Saturday at Churchill Downs.

Temple City Terror stopped the teletimer in 2:31.76 for 1 ½ miles over “firm” turf under Adam Beschizza, who rode the winner for trainer Brendan Walsh and owners Marc Wampler and Jared Shoemaker of Pocket Aces Racing LLC.

As the field entered the final turn, Temple City Terror commenced a three-wide move and quickly moved into third. Stand Tall briefly grabbed the lead from a tiring Undisturbed after 1 ¼ miles in 2:06.91 but was quickly met Temple City Terror, who blitzed to the front at the eighth pole.

“She loves this distance and the ground here at Churchill,” Beschizza said. “Just like last year she was able to relax and had a good kick coming home down the lane. I think this race gives her a good steppingstone for graded stakes down the road.”

The win was worth $96,722 and improved Temple City Terror’s career earnings to $435,718 with a record of 5-4-5 in 24 starts. It was the second stakes victory of her career. She ran down Dalika to win last year’s renewal.

“She loved the old turf course and loves this new one.” Walsh said. “She was always traveling well, I thought. At the three-eighths pole, she started to make her move and was passing horses quickly. She didn’t quite go by (Stand Tall) as easily as I thought she would but was still able to get the job done.”

Temple City Terror returned $7.60 as the 5-2 co-second betting choice along with Stand Tall. La Lune was another four lengths back in third.