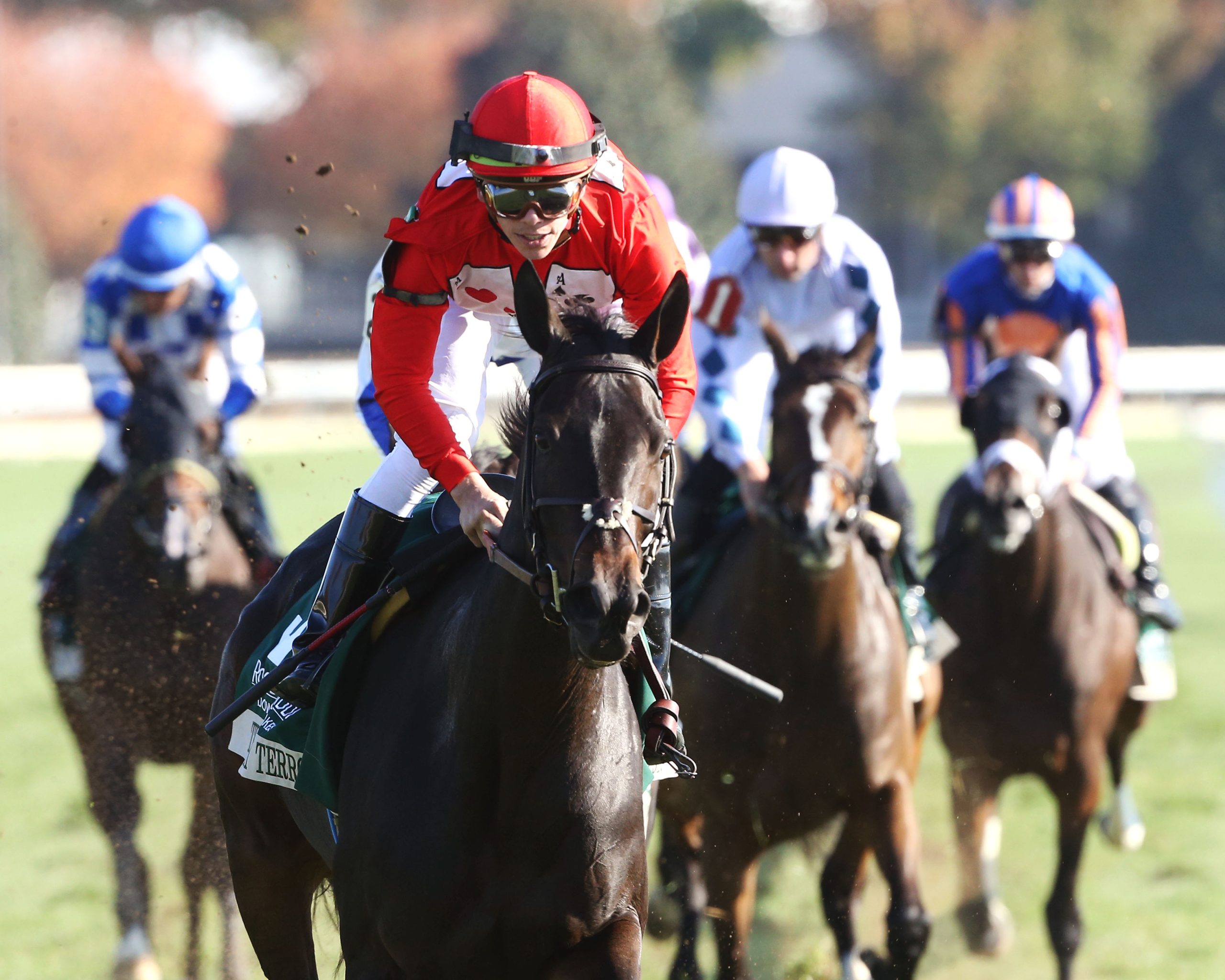 From bloodhorse.com by Mary Rollins; photo by Coady Photography

Although entered in the Keeneland November Breeding Stock Sale, there may be slight change in plans in store for Temple City Terror after the mare’s dominant victory Oct. 23 in the $294,688 Rood and Riddle Dowager Stakes (G3T) at Keeneland.

“We’ll see about that,” trainer Brendan Walsh said with a smile. “There will be some negotiations between now and then and we’ll see what happens. She’s a filly we’d love to try and keep for next year if we could.”

Temple City Terror has enjoyed a breakout year as a 6-year-old, successfully defending her title in Churchill Downs’ Keertana Stakes before putting forth a supreme effort when running second to the mighty War Like Goddess in the Aug. 6 Glens Falls Stakes (G2T) at Saratoga Race Course.

The partners of Pocket Aces Racing and Somewhere Stable began to formulate a plan for their stable star when Temple City Terror finished fourth, beaten a head for third, when caught six wide in the Flower Bowl Stakes (G2T).

“(The Dowager) has been our plan for a long time since Saratoga,” Walsh said. “The boys (Mark Wampler and Jared Shoemaker of Pocket Aces Racing) said don’t worry about anything else, let’s just try to win that graded stakes at Keeneland, so we’ve trained her specifically to come here and try to win this. It’s nice when a plan like that comes off.”

The race played beautifully into the hands of Tyler Gaffalione aboard Temple City Terror, as a pace battle ensued between the Todd Pletcher-trained Beside Herself, a 3-year-old tackling older fillies and mares for the first time, and Flying Fortress. The pair rattled off a :23.36 first quarter, unusually quick for a 1 1/2-mile route, and continued to press the issue down the backside, clocking the half-mile in :48.14. Flavien Prat managed to finally slow the tempo down on Beside Herself past the six-furlong marker and held a 1 1/2-length lead as the field swept for home.

After being second to last for the first mile, Gaffalione inched Temple City Terror into the clear around the bend. She slingshotted into the lane, driving past the leaders and widening her advantage to the wire.

Spurred on by the raucous cheering from dozens of the syndicate members watching their mare from the rail, Temple City Terror streaked to the finish three lengths in front of Luck Money , with Sister O’Toole third. Her powerful closing quarter in :22.93 lowered the Dowager stakes mark to 2:27.98.

“It’s great to win a graded stakes with her finally. She’s been knocking on the door and been a little unlucky, but I think she’s really improving as time’s gone on,” Walsh said. “She’s been a rock star her whole career. We love her, we’ve had her a long time, and you kind of get attached to ones like this.”

Temple City Terror ($7.94), who earned $174,375 to increase her bankroll to $696,218, has proven a shrewd bargain buy for Pocket Aces Racing. The syndicate picked up the daughter of Temple City   for a mere $22,000 as a yearling out of the 2017 Keeneland September Sale from the Upson Downs Farm consignment. She has six wins in 28 starts, with five seconds and five thirds.

Bred in Kentucky by Upson Downs, Temple City Terror is the first stakes winner out of the More Than Ready mare It Takes Two, whose four foals to race have all been winners.