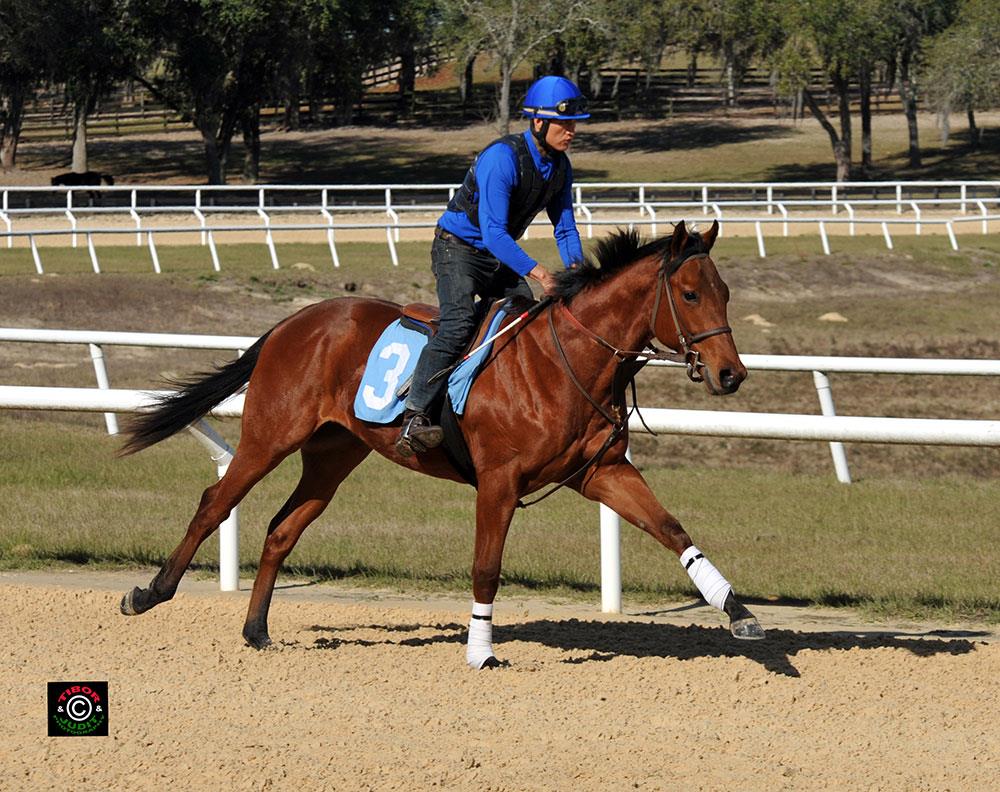 We recently received a series of photos and a short training video of our 2-year-old colt by Majestic Warrior named Warrior Prince. When I first saw the pictures I was amazed to see how much he had filled out and grown up over the last three months or so. Watching the video, I couldn’t help but get excited about his prospects for racing later this year. I believe the big, free flowing and athletic walk I saw on him at the July Fasig-Tipton Select Sale has really translated into a long striding and efficient way of going on the track. Combined with the information I’ve gotten from Pete regarding his extremely focused approach to training (which I actually first started hearing about when he first went to the track at High Point last fall) and it makes me cautiously optimistic that we could have something special on our hands.

Aside from the physical changes and outstanding progress Warrior Prince has made in his training, there have also been some significant pedigree updates on both sides of his family since we purchased him. When we bought Warrior Prince in July of 2014 his sire, Majestic Warrior, was riding a dramatic wave of racing success by his progeny. Princess of Sylmar was just finishing up her Kentucky Oaks-G1 winning career with over $2,000,000 in earnings and the careers of graded and listed stakes winners Best Warrior, Declan’s Warrior and Lady Sabelia were just starting to take off. Since our acquisition of Warrior Prince the flow of top-class runners has continued unabated from his sire. Current 3-year-olds Sharm and Xoxo have established their presence on the colt and filly 2015 classic scene with placings in the Hopeful-G1 and Santa Ynez-G2 respectively. New black-type horses such as Shannon Nicole, Winehouse, Dona Ragazza, Samurai Niki and Surprise Force have also emerged. Finally, the aforementioned Lady Sabelia is the morning line favorite in the $300,000 Barbara Fritchie S.-G2 on 2/14/15.

The most important update to Warrior Prince’s pedigree over the last eight months though, has come from his mother’s side of the family. On September 12th of last year Warrior Prince’s half-brother, Unblunted (a 2-year-old at the time), made his career debut an impressive one by finishing a hard charging 2nd in a maiden special weight race at Los Alamitos. Unblunted made his next start count with a maiden special weight victory at Santa Anita the following month. His connections chose to bypass the allowance ranks in his next two starts opting instead to ship him to Northern California for the Gold Rush S. and then back to Santa Anita for the Sham S.-G 3 in that order. Unblunted failed to fire in either race. It’s easy for me to be critical, the lure of having a horse on the Derby Trail can be very strong, but it seems like developing Unblunted at an easier pace would have been more beneficial to both his short and long-term career. Anyway, we are very confident that we haven’t seen the best of Warrior Prince’s half-brother. We know he has a great deal of ability and he is still lightly raced so we remain very hopeful that he is able to build on his career and achieve a great deal of success. We feel like it is important to update everyone on Warrior Prince’s physical progress and family updates for two reasons. Frankly, one reason is because there are still shares available in him. The second is we can’t help but think we’re letting the horse down in some way. We’re somewhat surprised that shares are still available and aren’t sure why that is the case. Maybe we haven’t worked hard enough to let everyone know what a special opportunity this horse represents. Maybe it’s the fact that his share price is higher than any of our other offerings this year. Whatever the case may be, if you’re in the game for a real shot at big-time, 2-turn colt, this opportunity is too good to pass up. As far as the cost is concerned, I would even say that Warrior Prince represents excellent value compared to many other yearling colts that I inspected last year that sold for far in excess of $200,000 and I’m certain the buyers of those ultra-expensive horses thought for sure that they were purchasing the same thing we got in Warrior Prince – an excellent prospect for very high level, route of ground colt races. As usual, feel free to callMarc (859) 312-6272 or Jared (606) 922-9325 or send us an email to [email protected] if you would like any further information on Warrior Prince. We would love to tell you all about him. Marc A. Wampler
Racing Manager
Pocket Aces Racing, LLC