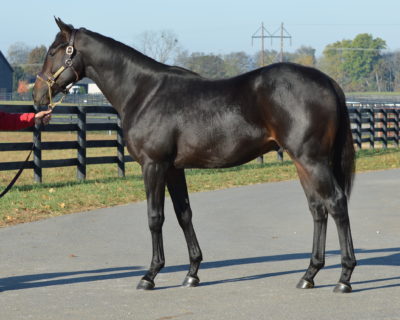 Pocket Aces Racing, LLC is thrilled to announce that we have recently added an Ohio bred racing prospect to our stable.  He is a yearling colt by the brilliant Grade 1 winner Girolamo and the first foal out of a young Forest Camp mare named Twilight Valley that we purchased at the 2016 Fasig-Tipton October Yearling Sale. We have been aware of the colt for quite some time as our regular Ohio trainer, Susan Anderson, bred him and offered him for sale at the Fasig-Tipton Sale. Susan has always been very pleased with the colt’s development and she has kept us current on his progress as she knows Pocket Aces Racing is always in the market for a good Ohio bred. We wanted to pass the connection with Susan along as a means of full disclosure.  However, we assure everyone that our decision to purchase the colt was made solely on his own merit.  We also felt very confident that Susan truly believed the colt was going to have talent as she was more than willing to stay in on him. As a matter of fact, she asked us if she could retain an interest in him so she is purchasing 10% of the colt for herself.

We actually went to the Fasig-Tipton October sale with every intention of trying to purchase the half-sister to our current 2YO Ohio bred filly named Conjuring (she won impressively first time out) and hadn’t put much thought at all into Susan’s Girolamo colt. However, when we inspected Conjuring’s half-sister we didn’t think she had the same kind of quality and athleticism that Conjuring had so we started to look at the rest of the Ohio bred yearlings in the sale. After several days of inspecting Ohio bred yearlings we hadn’t found anything we liked, not even close really, until we saw Susan’s Girolamo colt on Monday. Straight away we realized he had a lot more quality and substance than any of the other Ohio breds we’d seen so far. We thought he had enough size but it is obvious he still has a significant amount of growing to do.  He stood over plenty of ground and had a great deal of strength in all the right places. Most importantly he has a very athletic way about him and moves fluidly through his limbs. He was so much better physically than any of the other Ohio breds that after the initial inspection we knew he would be the Ohio bred we wanted to purchase.

In addition to being an excellent physical specimen, especially for an Ohio bred, we are also excited about his pedigree. His sire, Girolamo, is a young son of one of the most prolific sire of sires over the past 20 years in A.P. Indy. Sons of A.P. Indy standing at stud have included Pulpit (sire himself of Tapit), Bernardini, Malibu Moon, Mineshaft, Flatter, Congrats, etc. Girolamo himself was a brilliant racehorse, capturing the Vosburgh S.-G1 and Jerome H.-G 2 in his career. While the colt’s mother was unraced she is by Forest Camp who is starting to establish himself as a quality broodmare sire. Forest Camp is still relatively young for a broodmare sire yet his daughters have already produced stakes winners such as Rockin Home, Flay Mignon, Really Mr Greeley and Sub Rest.