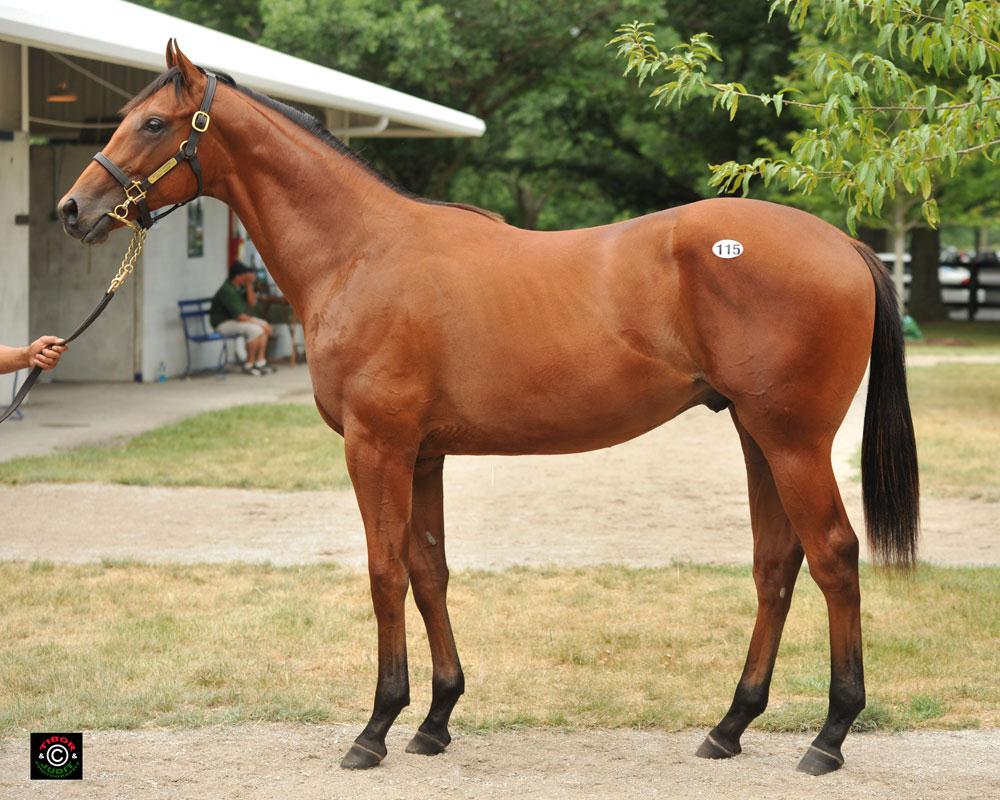 Pocket Aces Racing, LLC is very excited to announce that we have added a new, young racing prospect to our stable. He is a yearling colt by the 2013 2nd crop champion sire, Majestic Warrior. We purchased him at the recently concluded 2014 Fasig-Tipton July Select Sale. This colt actually represents a significant milestone for the stable as he is the first purchase we have made at a “Select” sale. All of our previous purchases have been in “Open” sales, in which all the seller had to do to enter the horse in the sale was pay an entry fee and the horse was in the sale. In a “Select” sale the seller first submits the horse to the sales company for consideration into the sale. Then sales company representatives inspect the horse in the flesh to determine whether or not it is physically good enough to be in the sale. Most are nominees are rejected. Recent graded stakes winning graduates from the Fasig-Tipton July Select Sale include: Rosalind (Ashland S.-G1), Flat Out (Cigar Mile H.-G1), Silver Max (Shadwell Turf Mile S.-G1), Vyjack (Jerome S.-G2), Summer Applause (Top Flight H.-G2), Corfu (Saratoga Special-G2), Bourbon Courage (Super Derby-G2), etc. Physically, this colt is an outstanding specimen. He is a tall, leggy colt that should easily exceed 16.0 hands (he’s pretty close to it now) by the time he is fully grown. We would describe him as being a very rangy colt that stands over a great deal of ground. He also has what we consider to be an ideal balance in overall body strength, without being too heavy, that we like to see in our 2-turn racing prospects. Front and hind limb conformation are excellent. Of his physical attributes we are most impressed with how the entire package works together when he walks. He has very agile and athletic forelimbs on the move and his hind legs extend with long, powerful strides. This easy, efficient way of going has also translated into his radiographic vet report for the sale being completely clean, which is very difficult to find. In addition, his throat was scoped and graded out as an A+ air way. The colt is sired by one of North America’s most exciting young stallions, Majestic Warrior. Majestic Warrior is a son of great A.P. Indy whose successful sons at stud include Bernardini, Malibu Moon, Mineshaft and Congrats. As a race horse Majestic Warrior displayed true brilliance at 2 by winning the Hopeful S.-G 1 at Saratoga. However, it was in the breeding shed where he would make his biggest impact. From only 2 crops of racing age he has already sired Kentucky Oaks-G1 and C.C.A Oaks-G1 winner Princess of Slymar as well Graded and Listed Stakes winners Best Warrior, Declan’s Warrior and Lady Sabelia. His mother, Bright Orange, has had 2 winners out of 3 to race and while the 2 winners have been successful, both earning over 6-figures, she was bred to very inexpensive stallions such as Doneraile Court and Kafwain. This breeding to Majestic Warrior by far represents the best opportunity the mare has been given to date. We would also like to point out that he was bred and raised at Hurstland Farm by Alfred Nuckols, Jr. Mr. Nuckols’ family has been breeding thoroughbreds in central Kentucky since 1922 and over the years they have established themselves with buyers as one of the most consistent sources of top class racing prospects in Kentucky. Since their first stakes winner in 1922, a horse named Cherokee, the Nuckols family has bred the likes of: Decathlon champion sprinter in 1956 and 1957; 1962 co-champion 2-year-old filly Smart Deb; 1972 champion handicap horse Typecast; 2002 Kentucky Derby winner War Emblem, successful sire Distorted Humor; track record holder Phi Beta Doc; winner of the 2014 Ashland S.-G1 Rosalind as well as countless other stakes winners. This colt represents an incredibly exciting opportunity and we don’t expect shares to be available for long. For more information, or to reserve your share, please contact Pocket Aces Racing LLC.