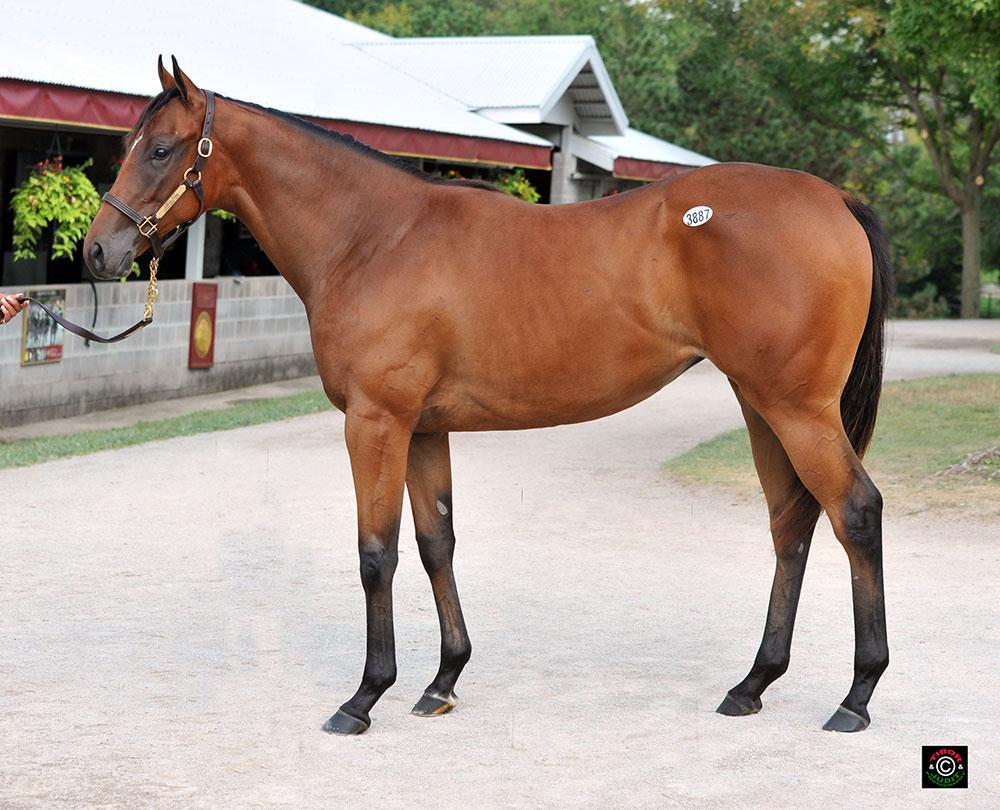 Pocket Aces Racing, LLC is extremely excited to announce that we have added a new filly to our stable. She is by the young son of Dynaformer, Temple City, and out of a 10 year-old Cape Town mare named Launchastorm. Physically we would describe the filly as being very powerfully built with loads of strength in her hip, gaskins and forearms. She has an ideal shoulder angle and she also stands over a great amount of ground. Both of these attributes should allow for maximum stride length. She is currently on the short side (I hesitate to say small because that insinuates she lacks strength as well and she is far from being weak) but she is a May foal and her back end is up higher than her front end, so we fully anticipate that she will be a good sized filly by the time she is done growing. Her hind leg conformation is great through her hocks and stifles and she is also correct through both knees. She toes out very slightly in her right ankle but it is well within acceptable limits. In addition, her vet report (linked below) is completely clean so there are no underlying orthopedic concerns. Finally, we would describe her as an extremely loose and fluid mover for such a strong filly. Sometimes these stronger horses can have a short, stabby action but she swings those hips and hind legs way out behind her, plants them firmly, and drives through them with power. When this sale started we knew we were going to be value shoppers so we tried to identify several young, affordable stallions, which we felt had a good chance to emerge as top class sires over the next few years. This filly’s sire, Temple City, topped that list and we feel very fortunate to have gotten her. We had tried to purchase several Temple City colts or fillies earlier in the sale but were outbid each time. Fortunately for us, this filly just happened to be the 3rd horse through the ring on the final day of the sale. It’s understood at the sales that the first 10-20 hips through the ring on any given session have a huge disadvantage for the seller. For this reason many sellers just scratch their horses from the sale if they get one of those hip numbers. Had she been selling 30 minutes to an hour later, we very well might not have been able to afford her. The demand for Temple City yearlings has been so great because his first crop of runners hit the track in 2014 and he has already sired Startup Nation – winner of the With Anticipation S.-G2 at Saratoga, Papacoolpapacool – 3rd in the Oak Tree Juvenile Turf S. at Del Mar, Saratoga Heater – Maiden Special Weight winner at Saratoga as well as several other 2-year-old winners. In addition Temple City himself is a Graded Stakes winning, track record setting son of the great Dynaformer that won races from an amazing 6.5 furlongs to 12 furlongs. Now that Dynaformer has died many in the industry feel like Temple City is the best candidate to follow in his father’s footsteps and carry on the Roberto line. We also feel like her female family is “sneaky good.” Her mother has produced two other foals, both of which have raced and won. Neither of those foals were by sires that had futures nearly as bright as Temple City, and those 2 foals have combined for 10 wins since 2012. In addition, this filly’s mother hails from the immediate family of Grade 1 winners Sharp Cat and Royal Anthem as well as multiple graded stakes winner Star Recruit. It has been some time since we purchased a yearling filly in this price range. The last was Pure Victory and she went on to win multiple races including an allowance at Keeneland. As with Pure Victory, we feel this filly represents tremendous value to the stable and we’re happy to pass this value on to our partners. We had commitments from several partners before we even got the pictures from the photographer. If you are interested in participating in this partnership, please don’t hesitate as we don’t believe shares will last very long.